Greetings to all in guitarland. A quick reminder to mark your calendar for next week’s WEBCAST. We are going to blow the speakers on your computer, so don’t be the guy saying, “Oh yeah, I forgot to tune in. How was it!?”. Info at the bottom of this page. This month’s column will feature some of my favorite vintage pedals and effects. These choices will be from my point of view and experience, and as I cannot with expertise speak about effects that I cannot use in the type of music I play (which is blues, old school country, classic rock and 50’s and 60’s R&B). I again welcome all suggestions for your favorite effects. 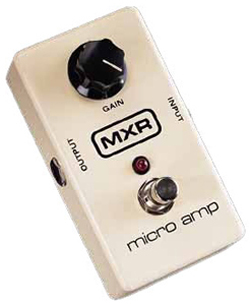 This is by far the most useful pedal I have ever used/seen. What this pedal does is so simple yet so valuable to any guitarist playing any kind of music. What it does is makes your sound either a bit louder or much louder. Don’t sound like much, but think about it, how many times were you playing and thought gee I would like to be a bit louder without changing my sound.

So before I get all excited, let me tell you what this pedal actually does. The Micro-Amp is an FET preamp with a 0 to 20+ db gain structure that does not color your sound at all (aside from the fact that you are pushing your preamp section of your amp harder which usually causes your sound to be a bit darker). In my effects chain it is my last in line (btw I only use 4 pedals). Over the twenty-five plus years I have owned one I have used it not only as a boost but have also used it to boost line levels when using long cable runs to isolation booths when recording. I have also used it in a pinch when amplifying an acoustic guitar with a piezo pickup and no onboard preamp. One other comment about this pedal, the battery life (especially the early versions with no LED) is extremely long. Yipee!!! Check one out you will not be sorry. 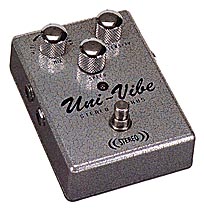 Yeah I know Jimi Hendrix used one, and after he died Robin Trower used one on his post Procal Harum albums. There is a reason these cats used one, I think the reason is that there is a magic to the Uni-Vibe that you can’t put a finger on. The best way I can describe it is that it’s thick yet lets the guitars dynamics come through. I have also always believed that it works best with single coil guitars, again I believe this is due to its fatness. IMHO if you want a similar vibe (pun) for your Les Paul or SG use a flanger.

I recommend the original of course, they are not cheap and not too road worthy but they sound unreal. The Dunlop reissues sound okay but I believe the Line 6 Modulation POD Uni-Vibe sound is better and cleaner. I also recommend the FulltoneDeja-Vibe. 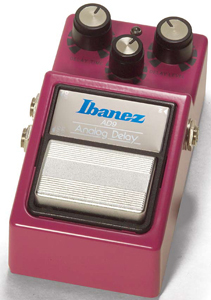 The AD9 is a great sounding analog delay, with three controls, feedback (repeats), delay time, and mix. These pedals were made in the late 80’s if my memory serves me correct. Before my brief analysis of this pedal let me proudly say that back in the late 80’s when we all got sucked into the idea that “digital delay was so much cleaner” mentality, I remember saying to my friend Jimmy Agnello “I dunno I like analog delays alot better”. Well now I think we all know that if it’s a toss up between sounding like Chet Atkins or Big Country…. well you get the picture. 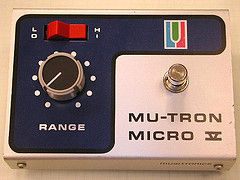 I bought one of these little buggers back in the early 80’s when I was playing bass and wanted to funk up my sound a bit. It worked pretty good on the bass, but when I shifted over to guitar and finally got the nerve to plug it in it really started speaking in funky tongues. Although all it had was one button, dude that’s all it needed. It also sported a switch that went from high to low, which accentuated the higher or lower frequencies. I can’t say for sure whether Frank Zappa used the MicroV or the full sized Mutron for his auto-wah effect but this pedal cops his signature auto-wah effect perfectly.

I also love the Ibanez offering from their early small button series, but this one sounds even better. Another aspect of this pedal that I like is that it is a bit more touch sensitive than any other Envelope follower I have tried. 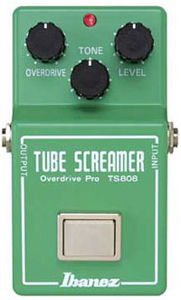 What can you say about a pedal that sells for ten times its initial price only 20 years later. The 808 in its original form had a small square on/off button on top, three knobs (distortion/tone and volume) and an LED light.. For most of us that have used this pedal the best way to describe it is its warm sounding even at its most trebly setting and it compliments the sound of any guitar and amp combination it is used with.

The pedal has its own sound no doubt, but part of that sound is its ability to not color your sound so much. To me it’s the perfect distortion pedal if you are prone to go back and forth from a cleaner sound to a slightly dirtier sound. The 808 is virtually indestructible and its battery life is pretty good.

Now onto the reissues and clones, first I will say that I like the reissue Ibanez TS808 that is currently available. I have A/b’ed it with a few of my original 808’s and they sound almost identical. I wish the lED was briter as on the originals you could gauge your battery life with it. The Maxon version which is in a smaller, flimsier case is not roadworthy at all. It sounds similar but not as close as the Ibanez reissue. The on/off switch is noisy and the pots are too close together for that foot adjustment we all have gotten used to with the original 808.

I must also mention a fellow Vermonter and electronics whiz Mr. Denny Coleman make a great version of this pedal under the name Musicians Junkyard Screamer this pedal is very close to the original, although I will say that it has a texture that my 808 does not, a kind of barely audible octave overtone that I like very much. Check it out. 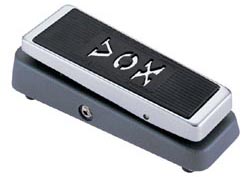 Yes my friends I know that there are many wahwahs that are classics and similar (Cry Baby’s etc.). I owned and used an original “Clyde” for years without knowing what a classic and valuable pedal it was. During this time I was using a Cry Baby also and was easily able to hear the difference between the two pedals.

Now I will also say that over the years I have had many guitar players complain about their wahs, and most of their complaints were based on the pedals not being setup right. The “throw” or the aperture (opening) needs to be set to your own taste, and that usually rights whatever problems you might have. (That adjustment is easily made by loosening the retainer screw which holds a plastic piece that comes down from the pedal and once this screw is loose you can adjust the throw on the potentiometer that controls the wah effect.

As far as the sound is concerned, I think that what separates the Clyde from the CryBaby is that it sounds a bit fatter in the low end and a bit less harsh in the open position. I also think that is has a nicer notch in the middle which helps for that wahwah sustain that Jimi used so well. I have never been a fan of the Morley pedals as their throw is too big and I can’t use them comfortably while standing.

Vox has reissued the Clyde with a true bypass and I own four of them and they are great, maybe even a bit cleaner than the originals which is a 50/50 aspect, some might like it, some won’t. I like these so much that I did sell my original Clyde for an insane amount of money.

These very cool little pedals were designed by Dan himself. They plugged right in the guitars output, which makes them IMHO a more studio friendly effect, but with a very simple reverse wiring you can plug them into the amp, and you’re good to go. The real winners of the line were the Orange Squeezer and Purple Peaker. Both of these add-ons were used by RyCooder, and David Lindley, and Mark Mothersbaugh of Devo used the Blue Clipper Fuzz duct taped to his guitar.

Here’s some really good news, after some really poor quality Korean copies of these high quality units were made back in the 90’s, these great little units are being handmade again in the USA using the original designs, and they sound great!!! Rumor has it that there will be some stomp box versions out soon too!

Some many effects so little time….

Please send me your favorite effects and I will add them in future columns.

17 thoughts on “A Gaggle of My Favorite Guitar Pedals, Effects Boxes, Units, Whatever!!!”