Recently, I was at a writer’s conference and there was another guitar player there and we started talking about amps and guitars and pedals and such, but mostly about amplifiers. And someone there (not a guitar player) asked me: “How many amplifiers do you have?”

I pride myself on only keeping equipment that I play, – I don’t have any collector’s-only pieces. Still, I have the cool gear disease. I did some quick math. “Five,” I said.

“What does your wife think?”

“No,” I said. “Those are in addition to mine. She’s a bass player, so she doesn’t need as many. I have five.” Whoops. I’d forgotten my Deluxe Reverb. “Actually, six.” I said.

This non-guitar player turned to the other player. “How many do you have?”

“You need at least three,” I said. “You need your single-ended, your mid-power and your high-powered amps.”

“Right,” my guitar-playing new friend said. The third person shook his head, laughed and walked away.

“They all sound different,” I called after him. “You don’t understand!” 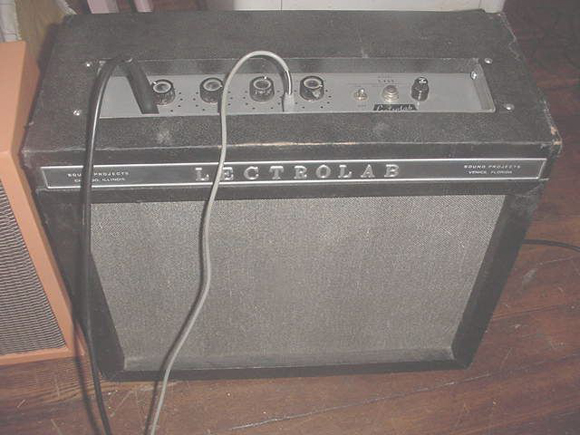 But you, dear reader with several amplifiers, you understand. And this month, I sing the praises of another obscure and beautiful amplifier, in this case a 1966 Lectrolab S 400. I’ve seen a few Lectrolabs over the years and they are all pretty cool amps. The 400 series seem to be (and this is based only on observation and scattered information. No one seems to know very much about these) all single-ended small amps with a single EL84 for output and one or two eight inch speakers. The 600 series are more in the 15-20 watt range with either two 6V6’s or two EL84’s (driving a twelve inch speaker), depending on the year. And the 800 series, which I’ve never seen in person, I haven’t been able to find much about, other than that they seem like later versions of the 600’s. The 900 series are El84-equiped heads (very rare).

So who was Lectrolab? As I say, there isn’t a lot of information out there about these. The chassis/labels tend to read “Lectrolab: Sound Projects, Chicago, Illinois/Venice, Florida.” The Chicago location leads some people to speculate that Lectrolab had something to do with Valco. And they do have a sonic texture much like the great Valcos (big midrange, great distortion, slightly dark sound). Yet, the rectifiers in these are usually a 6X4’s (not used much, if at all, in Valcos). The preamp tubes are frequently 6EU7’s (again, not often in Valcos), and the output tubes are often EL84’s (which most American amp companies didn’t use in the 1960’s’Gibson being the notable exception).

So, whoever Lectrolab was, we don’t know. But they probably were their own company, and almost certainly not Valco, or Gibson or any other well-known maker. 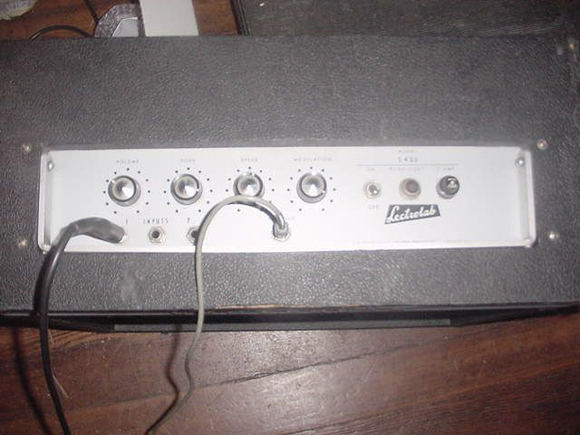 Whoever made these, they knew how to make an amp sound good. I have never heard a bad sounding 60’s Lectrolab. My S 400 has become my number one practice amplifier. I’m so in love with its tone, I added a ‘line out’ so that I can use it as a preamp for rehearsals and gigs. Coupled with a Magnatone 213, and it’s an awesome gig amp (and you get the added bonus of tremolo and vibrato’rad!).

This S 400 is from late 1966 and had two CTS 8″ alnico speakers. It’s got the 6X4 rectifier, a 6EU7 for the preamp and a single EL84 for output A 6AU6 takes care of the deep, pulsing tremolo. The control panel has four knobs: Volume, Tone and Speed & Intensity for the tremolo. This is a superb recording amp’a rich, complex overdriven tone that sounds huge with a mic. It reacts really well to the picking attack and cleans up as you roll off the volume. The tremolo is very musical and thick. For a small practice amp, it has a very nice bottom. With an overdrive pedal, it thickens and deepens even more and nails tones from the early 50’s Hubert Sumlin to the early 70’s Ronnie Wood Faces’ tone (one of the great, underrated guitar tones of the 70’s).

If you can find an original 60’s Lectrolab, you should snatch it up. I’ve played this next to a Supro Twin Eight and it held its own (and the Valco-made Supro Twin Eight is an awesome little amp). The twin eight inch speakers sound much fuller than your traditional single eight (like a Champ), and it’s got a superb tone for guitar or harp. A hard-to-find sleeper of an amp, but worth the hunt. And happy hunting!