Hot chicks in tight pedal pushers with angora sweaters tied around their necks. Quaint chalets and picturesque streets. Snow capped mountains in the background. Elegant expensive restaurants. Skiers. Winter sports. Aspen, right? No. St. Moritz in the Swiss Alps! But what the heck does a resort in Europe have to do with a groovy stereophonic guitar from Japan? Damifino! But both are pretty cool!

Some of my greatest experiences in music have been in ensembles, but for the most part I’ve been a soloist. Already in the late ‘60s I was thinking about ways I could split signals to different amps. There wasn’t really much of a concept of effects yet back then. There were some effects, but they were pretty esoteric and I didn’t know about them. But I thought it would be so cool if you could create a surround sound sending parts of your signal this way and part of it that, kind of like panning. I doodled with primitive plans. It never went anywhere. I’m no engineer.

And I didn’t know there were people thinking about this problem already. But as this ca. 1968 St. Moritz stereo guitar demonstrates, they were.

The notion of stereophonic sound goes back at least to 1881 and Clement Ader in Paris. That such an idea should apply to sound is easily understood when you realize that stereoscopic photography applying to vision had already been around for 20 years or more. A long history of stereo sound unfolds but the first commercial records appeared from Decca in 1945. A common standard was established by RIAA in September of 1957. In 1958 the first modern stereo records appeared. I remember it well. And both stereo and mono records continued to be produced over the next decade or more.

Playback in stereo is one thing. But playing in stereo, that’s another matter. In history, it’s often hard to pin-point the first “who.” But probably the first to come up with the notion of a stereo guitar was Gibson with its ES-345 in 1959, which this guitar clearly emulates. A good candidate for inventing individual pickups might be Dave Bunker, who came up with the idea in the early ‘60s. Someone may have preceded him, but I don’t know who. 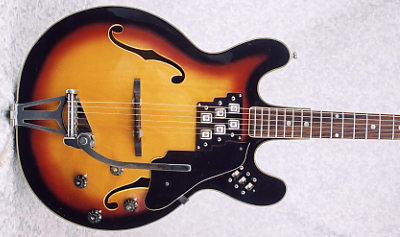 Probably both these influences led to some wag in Japan coming up with this St. Moritz. I have no idea who may have been responsible for this brand name. A relatively fair number of this brand exists, so it must have been a significant distributor or retailer. I don’t mean to say these are common like a Teisco, but neither are they totally rare.

When I bought this guitar I expected it to be another cheapo Japanese hollowbody. There were some pretty crappy ones made back then. But plugging this one in gave me a little whiplash. This is a really sold guitar and these goofy pickups really, really pack a punch. Each little ceramic unit is mounted on a large plastic base or plate and has its own magnet, pole and coil. Wiring is split down the middle, with the output as 6-4 on one channel, 3-1 on the other. You can switch off either channel, though why you would want just treble or just bass output is a bit of a mystery! I guess turning them both off gives you a roundabout way to “standby.” You can also get a mono signal using a Mix position. There are two volumes and two tones each associated with its own channel.

As with all ‘60s Japanese guitars, the electronics leave a bit to be desired. No sliding switch provides the greatest trouble-free connection and these cheap units are particularly bad, especially with age. Thin, unshielded wire and the smallest amount of solder don’t help. Still, this is a great sounding guitar.

And it feels good, too. I’m not much of a thinline man, but this neck feels good and sturdy and the guitar has enough adjustments to let you set it up perfectly. The body is probably laminated, but even with that it’s better than all those little Teiscos.

I’m not really sure when this guitar is from. I’ve picked 1968 because by then the Japanese were making some very interesting guitars and the cleverness of these electronics and quality construction seem to fit with that period of creativity. But it really could be anywhere from around 1966 to 1970.

So, as far as I know, this guitar has nothing remotely to do with Switzerland. But, had I only known about this St. Moritz back in the day, I would have been in heaven! And I’m sure I could have afforded it, unlike an ES-345! And nevermind the ballsy stereo output, how could anyone resist a guitar with a pickup that looks like this?!