Now, I don’t really think there was – or even would have been – any sinful activity associated with this guitar. And the fact that its design is based in part on a religious motif is purely coincidence. But it is a funny story how this rare 1978 Kawai KS-700 guitar was discovered, in Sin City, no less.

It was 115 degrees in the shade – of which there is none – in Las Vegas, the city that never sleeps. I was there for a scientific conference and found myself with an open early afternoon before the next session. I’d heard about this hot strip club on the edge of town and thought, “What could it hurt to spend an hour or so enjoying the local sights?” So I hopped a bus and headed out toward the desert. I got off the bus and walked toward the club door full of anticipation. Doors opened in about 2 hours. Right! 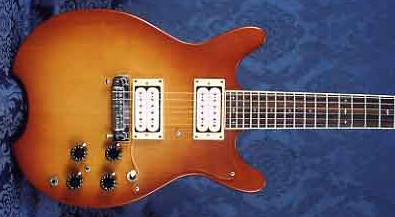 Then heaven intervened. I turned my gaze across the street and what should I see? Two blocks (two blocks!) of pawn shops! Hmm. Let’s see. Beautiful naked girls. The chance of a guitar find. It took about 2 seconds to place that bet! A sure thing was calling!

A number of interesting possibilities presented themselves before the spirit led me to a dark corner in a cage and this Kawai. I didn’t know what it was, but I knew it was cool and I’d never seen another. Done.

What I’d found was a cool 1978 Kawai KS-700, a rare artifact from that brief period in time in the late 1970s when the realities of global guitar trade were finally hitting home. The “copy era” had revealed both the excellent skills of Japanese guitar makers and the lack of direction of the American establishment. This culminated in the famous 1977 lawsuit of Norlin (Gibson) v. Elger (Ibanez) that put at least a temporary end to copying. Japanese companies rushed into the breach with a number of original designs, many inspired more or less by the popularity of Alembic at the time (think Musician, Rev-Sound, etc.).

This Kawai was part of that response, but also but reflects an earlier related development. As early as 1975, the Japanese, feeling confident in their abilities, wanted to establish more of a Japanese design identity. The result was both some of the most interesting “conventional” solidbodies of the ’70s – like the Ibanez Artist, Aria Prototype, and Yamaha SGs – and some of the more curious designs, including the Ibanez (and Greco) Iceman, the Lucky Cat guitar, the legendary Kawai Moonsault and others, all decidedly Japanese.

The Kawai KS-700 shows all the “natural” predilections that surrounded the Alembic aesthetic (the brown sunburst), plus overtones of guitars such as the Artist. Unlike many of its contemporaries, this features passive rather than active electronics (the mini toggle is a coil tap), though the amount of shielding is remarkable. But what makes this really cool is the head treatment, which reflects the Japanese design movement. Use of the retro slotted headstock allowed Kawai to create a design inspired by the Torii gates that mark the entrance to Shinto shrines. No way Gibson could mistake this puppy for trademark infringement! Talk about a statement!

The Kawai KS-700 was only made until 1980. It’s not even certain that it was ever marketed in the US. I’ve never seen another. How it made its way to a pawn shop across from a strip joint in Sin City remains a mystery. But one thing’s sure, if someone’s hand hadn’t closed the doors of that strip joint in the heat of day, this nifty guitar never would have made its way into my hands. And that would have been a sin.