I had a single-minded desire for single-ended tone, but I didn’t want to drop insane moolah on a tweed Champ (or any of the tweed Champ clones out there, or even a tweed Champ kit), cool as they may be. Heck, even a Silverface Champ is going to set you back in the $300+ range these days. And it’s a Fender. Dependable? Yup. Great sounding? Sure. But no one is going to see it and say, “What the hell is that?” Which is part of the fun for those of us involved in the weirdoes and freakazoids of the gear world.

So, I was looking for a single-ended amp. Say what you will about class A/B amps (and, to be fair, most of the great recorded tones in rock history are class A/B push-pull amps), some of them don’t really get singing until they’re too loud for the bedroom or studio. Sometimes you just need to hear that cranked tone without getting the knock from the neighbors. To quickly recap: 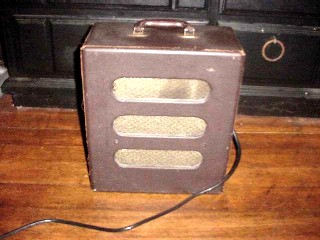 So what did I buy? A late 1940’s FIDELITY, of course. Haven’t heard of FIDELITY? Me, neither. But it met the needs. It was very light an easy to carry. As for meeting my volume needs…it was VERY quiet. Dead quiet. As in, silent. So, that part needed some work. Sixty bucks. Not bad. Less than an assembly-line stomp box. It looked like a 50’s space heater in crap brown with tootsie roll brown and vanilla cream paint and chicken head knobs. Score, Daddio

When it showed up, my wife shook her head. This can be a good sign or a bad sign…it depends on how it turns out down the road. Sometimes, I fix these things up and make lots of money and buy her a new bass. Sometimes, I lose money and crap piles up in the garage. I try to remind her often of the former and play down the latter as much as possible. 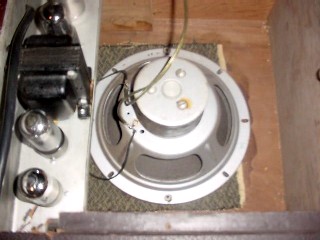 Anyway, this little beast didn’t need much work. This is one of the pleasures of working on a Champ-style practice amp. They have so little in them, there’s simply not much to go wrong or fix. This one, it turned out, only needed a filter cap job, a new preamp tube and one coupling cap. Piece o’ cake. Twenty minutes of soldering and one $4.00 7F7 tube later, I had a monster little Champ-esque amplifier (actually it sounds a little more like the Gibson Skylark than a Champ, but that’s cool by me) for under $80. 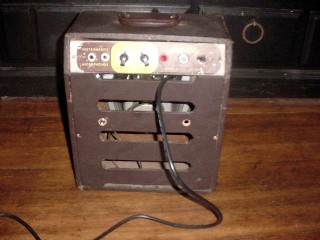 Quirks? Some. The old Rola was kind of tired, so I saved it and put in a new Jensen Mod I had laying around (not a bad little speaker, but not a vintage Jensen, either…expect a future upgrade). The 7F7’s are supposed to be very loud and micro-phonic (which was why we don’t tend to see them in guitar amps after the mid-late 40’s), but this one sounds just fine. And they’re cheap, so it’s not like you’re hunting down good EL86’s or anything. Also, one thing that took some getting used to was the tone knob is backwards by contemporary standards. That is, turn the creamy chickenhead to the left, you get more treble (and more drive and volume). Turn to the right, and it gets very bassy and like a chewy jazzy tone.

The other cool thing about these old non-collectable brands? A modification isn’t sacrilege. I added a “speaker out” jack to drive a bigger cab (using a practice amp cranked through 4X12’s is too much fun…a little amp can move a lot of air in a big cab) and a “line out” jack to use this as a pre-amp with a bigger power amplifier at shows. 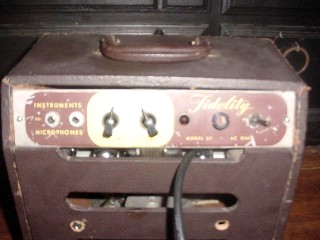 Where can you find one? My guess is that FIDELITY was a housebrand (like Holiday or Silvertone), and these might be Valcos or some other maker. But I have since seen 2 or 3 of them on Ebay, not going for too much money. Also, there are several other brands (and no-brands) that look much like these, so keep your eyes peeled, don’t pay too much, and score a little gem that will have other guitar players saying “what the hell is that” and have your significant other shaking his or her head when the UPS/Fedex people come knocking.