Blame it on disco.  I remember it well…as an observer, of course!  The excesses of early ‘70s hard rock inspired a vapid dance craze reaction toward the end of the decade with mirror balls and platform shoes and, well, you know, Studio 54, glitter spandex, and Donna Summer and all that.  The music was mostly played with keyboard synths and drum machines, fairly new technology at the time.  The guitar press predicted: It’s The End of guitars as we know it.  But was it really?  (Obviously, we all know the answer to that rhetorical question!)

I didn’t really pay much personal attention to disco.  I didn’t dance and I didn’t hear too many guitar solos to make me interested in listening.  I was working at a commercial classical radio station at the time and my greatest exposure was a somewhat satirical—and as it turned out quite successful, I might add—disco party for key advertisers, for which I had to obtain the music.  I was mildly alarmed by the press predictions regarding the demise of guitars, but I needn’t have worried.

Anyhow, the response of the guitar industry was to try to turn guitars into synth controllers.  Keyboards are ideal synth controllers.  They are immediate and precise.  You hit a key and you get a clear electronic connection that is instantly, easily, and unequivocally recognized by the machine and its software.  They’re perfectly polyphonic.  And once you eliminate the need for anything but the keyboard—no strings, no soundboard, no pipes—they can become quite compact and portable.

Guitars…well, not so much.  A good clean note is obtained with good clean contact between the string and the fret, but you know how often that doesn’t happen!  We bend notes, even when we don’t intend to.  We move our fingers around to put “English” on the tones.  In short, despite the best efforts of brilliant engineers at Roland, Korg, Yamaha and elsewhere, guitars make lousy synth controllers at best.  To play guitar synth you’d best possess pretty darned good technique.

Don’t get me wrong.  I really admire the synth guitars that were created during the period from roughly 1977 to 1987 or so.  But if you want to play some disco, get a keyboard. 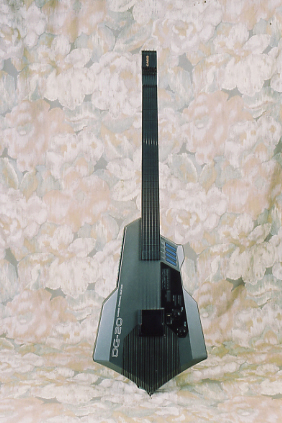 That said, there were some interesting attempts to create a hybrid solution, notably by Casio, like this nifty little 1987 DG-10 Digital Guitar. Okay, I hear you sniggering about this toy guitar.  You might say it doesn’t even look much like a guitar, although, if you recall guitars from the 1980s, you remember there was some weird stuff that was popular, from minimalist headless Steinbergers and Kramer Dukes to Prince’s elaborate guitar sculptures.  All right, I’ll give you that it looks more like a toy than a guitar.

But let’s not focus on what it isn’t, let’s concentrate on what it actually is.  This juicy little “toy” is actually a full-blown amp-in-guitar and MIDI controller.  The fingerboard is a rubber touch pad with, presumably, articulated “frets” with 6 contact points each.  The nylon strings are all like 3rd strings.  Yamaha did this same thing on its synth controller, by the way.  I suspect that’s to equalize the contact using identical string mass.  There’s a built-in battery-powered amp with 4” speaker.

You can play this like a guitar, or guitars.  On top you can choose from 20 preset sounds.  You can add automatic percussion rhythms.  Pick the tempo.  Punch in sustain and reverb, and change the key.  On the front you have an on/off switch, master volume and rhythm volume.  You can mute your guitar, activate or turn off the rhythm sounds, add in some fill.  Oh yes, and there’s a manual drum machine pad if you’re dexterous, with a choice of cymbals, low tom, hi tom, and snare drum sounds. 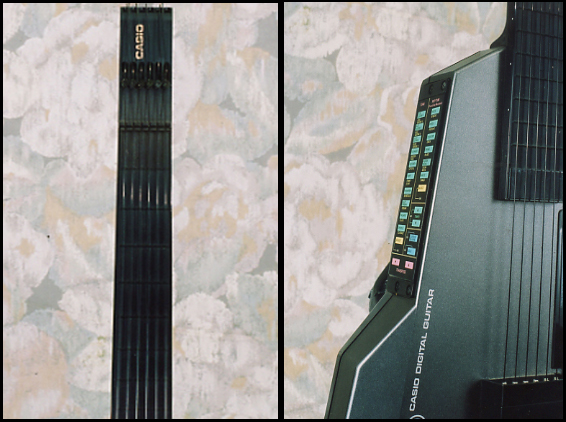 And if that’s not enough, you can send the signal out to an external amp.  You can plug in headphones.  Pick two MIDI modes, omni or poly, to coordinate with whatever gear you use.  Plug in a MIDI DIN cable.  And use an AC plug, should you be so inclined.

Yeah, any kid can figure this toy out.  Well, maybe a kid could.  I never got past the amp in guitar with automated drum machine and I hope my life never depends on knowing the difference between omni and poly synths.  Not that I mastered even just playing guitar.  I think I played at a couple of my son’s baseball games, sitting in the bleachers doing “charge” sounds.  But the Casio DG-20, in the right hands, might just be the guitar you need to do disco!

For the record, as it were, I did continue to peruse disco record bins for a few years—disco was LP music, before CDs—and found, to my great surprise and delight, that there actually were some disco disks that featured hot guitar licks!  Metal guitar disco.  Numerous disco-flamenco fusions.  Rasgueado goes great with the turn-around pump of “unh-uhh, unh-uhh, unh-uhh.”  They were never too popular, though.  Blame it on disco. 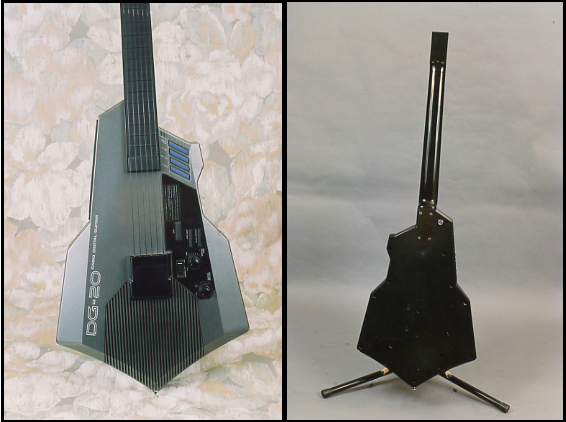