Behind every guitar there’s some sort of story, but they usually aren’t as rich as the one behind the Kramer Gorky Park seen here! Not only was this guitar associated with one of the big flash-in-the-pan pop metal bands of the late 1980s, it symbolically and almost literally marked the end of Kramer, as the largest guitar company in the world was crumbling just like the Iron Curtain! 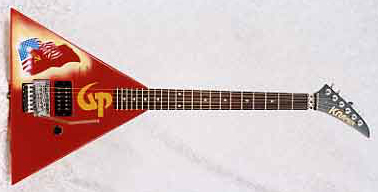 Let’s start with Kramer. Kramer began back in 1975-76 with the cool idea to make guitars with aluminum necks inspired by Travis Beans, in itself a neat story. The main people were New York music store owner Dennis Berardi, and Gary Kramer, who subsequently hooked up with former Gibson marketer Peter LaPlaca of Chicago. Kramer quickly left and Kramer (the company) went on to create some truly great guitars. In the early ‘80s, as Strat-style guitars began to take the world by storm, Kramer began a transition to wooden necks. Guitars like the Strat-style Kramer Pacer became extremely popular. Big endorsements by top players like Eddie Van Halen, Richie Samboro, and Elliott Easton didn’t hurt either!

By the mid-‘80s Kramer’s pointy droopy headstock, while an anathema to snooty vintage guitar fans, was in the hands many top and aspiring guitar slingers. In 1984 Kramer made the fortuitous decision to start selling budget versions of its own guitars, Focus from Japan and Striker from Korea, to further cultivate fands for the brand. By the beginning if 1987 Kramer was making and selling more guitars than another other guitar company! What could go wrong? 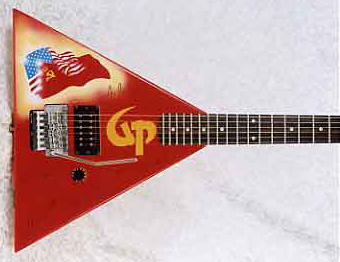 Many of the guitar players who favored Kramers were in the hard rock and pop metal bands that had become popular in the mid-‘80s as interest in punk and New Wave began to wane. Centered in L.A., this rock movement mostly featured guys in tight glam Spandex outfits with long, ratted and teased poofy hair. “Hair bands!” Catchy melodies, a hard backbeat, and lots of rifferama.

Enter Mother Russia. About the same time Kramer began importing guitars, 1985, Mikhail Gorbachev took control of the Communist Soviet Union and began a process of liberal reforms. Among those were a toleration of underground music such as rock and a relaxation of travel restrictions.

In 1987 singer Nikolai Noskov, Sasha Minkov on bass, Sasha Lvov on drums, and Jan Ianenkov on guitar formed a rock band called Gorky Park, named after the big public Moscow park in honor of Maxim Gorky. The band was able to travel to the US and soon acquired champions including Frank Zappa and Kramer advocates Jon Bon Jovi and his axeman Sambora. In 1989 the band’s self-titled album debuted and they scored three successive hits and MTV rotation, the first popular Russian hair band.

Probably through the Sambora connection Kramer’s Dennis Berardi became interested in the band and formed a management company to handle them. The Kramer Gorky Park was intended to be a promotional item in support of that effort.

Built for Kramer in Korea and introduced in 1989 or early 1990, the Gorky Park had a cool balalaika shape and graphics and signature of the band. Ballalaika. Russia. Geddit? The guitar really wasn’t all that bad, actually. It has one hot Seymour Duncan humbucker and a licensed Floyd Rose.

Unfortunately, the Gorky Park arrived just in time to see everything crumble. In 1989, the Iron Curtain came down, as Berliners attacked the Berlin Wall and dismantled it. I still have a piece in a box my parents gave me as a present! Gorky Park returned to the exuberance of liberation in Russia. Alas, the enthusiasm for hair bands in the US was also beginning to crumble as alternative rock represented by the Seattle Sound was coming on. Lastly, Kramer guitars itself had become a house of cards and was beginning to crumble. Bad management and other bad things began to undermine it—it probably didn’t help that Berardi was off focusing on Gorky Park. By the end of 1990 Kramer guitars also collapsed.

Whether the Gorky Parks were ever even distributed is unknown. How many exist is also unknown. Many of them were bought up (or turned over) to some large dealers, as I recall, and were liquidated for like $149 apiece. Gorky Park, the band, continued to be popular in the former Soviet Union, but became mostly a footnote to ‘80s rock and guitar history. Today these guitars show up every so often and can actually trade for quite a bit more than the clearance price! In the early 2000s the Kramer name was sold to Gibson by its owner, Henry Vaccaro, a former principal in Kramer, in order to finance the now-defunct Vaccaro Guitars venture. Like the Gorky, modern Kramers are budget imports, but with no connection to the former Soviet Union!