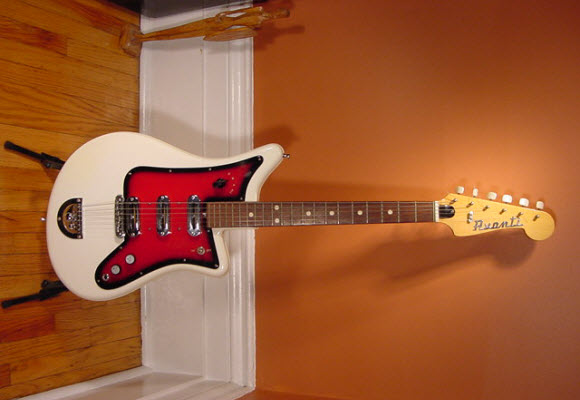 In the 1950’s Italian manufacturers were cranking out accordions by the thousands. When Rock ‘n Roll came on the scene, many of these builders switched from accordions to electric guitars. Bartolini was one of them. When the electric guitar boom took off in USA in the early 60’s, Italy became a source to fill the appetite. Accordions were plastic covered, so many of these early Italian guitar were too, some with plastic bodies like this Avanti model.

Not much is known about them, but here is an excerpt from a Michael Wright article:

Avanti guitars were probably made by the Polverini Brothers of Castelfidardo for European Crafts of Los Angeles beginning in late 1964. Most early Italian guitars had either push-button or rocker controls adapted from accordions, but this is unusual with a fourway rotary select that let you choose each pickup individually or all at once. All in all a sensible arrangement. Whether the pickups are really humbuckers or single-coil is unknown, but they have that bright ’60s sound.

The Italian guitar boom did not last too long, as Japanese manufacturing took over the low end guitar boom in the late 1960’s and soon all the cool European guitars disappeared from North America.