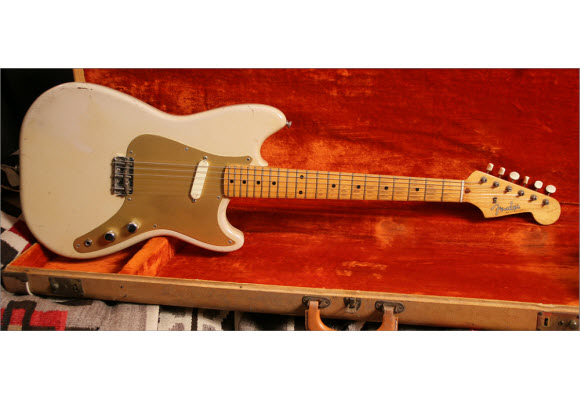 A couple of months ago, I inquired about an Eastwood 12-string electric guitar. Your response was immediate, and ever since, I have enjoyed your website. After seeing today’s email, your request for stories brought back memories of my first Fender. I hope you find it interesting.

Back in the Sixties, Fender guitars were the holy grail of electric guitars. I knew two people in the valley that had Jazzmasters. But, being a sixteen year old kid, owning a Fender was out of the question. For us, it was the Sears or Eaton’s catalogue and a cheap, poorly built guitar from another land. My first electric guitar was so poorly built it could not be tuned properly, and every time you switched pickups, you got a shock. It soon went back to the catalogue company. I settled for an Italian acoustic and played folk music, but the thought of an electric guitar was never far from my mind. Playing Ventures music on an acoustic just didn’t cut it. After a long and hot summer, I earned enough money working at a chicken farm to head off to the city and see if I could buy some sort of electric guitar. 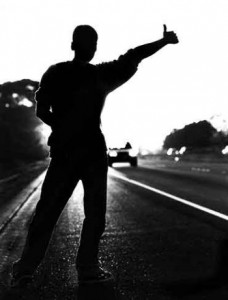 One sunny morning, I swung my acoustic across my back, stuck out my thumb and headed for the city, about 2 ½ hours away. Pretty soon an old beat up Hudson pulled up, driven by a longed haired hippie, with wife, baby, and sister. Strapped to the roof were their worldly possessions, as they were from California, heading north to the gold fields in Alaska. I got in the back with the sister, guitar across my knees as there was barely room with all the boxes and clothes. We got to talking about their adventure, life, sixties politics, and eventually music. I mentioned that I was headed to the city to see if I could trade my acoustic in on an electric guitar. After a while I learned that he had a Fender electric in the trunk. Of course, I was pretty excited that I met another Fender owner, and we talked different models etc. After a couple hours, he eyed my acoustic and told me that they were a bit short on cash and he would consider selling his Fender, taking my acoustic as part of the deal.

Deep in my heart, I was thinking, “I’ll never be able to afford it, but what the heck, at least find out how much he wanted for his guitar”. He scratched his beard for a few seconds, and said “tell you what…your acoustic and ninety bucks, and you got yourself a deal”. Well, you could have peeled me off the roof of the car. I was in heaven – I was going to buy a Fender! My summer’s work had put $130 bucks in my pocket, so I said I might be interested. Yeah right, I would have given him every cent I had. I wanted that Fender, and I am sure he could tell I was pretty excited. He would get the guitar out of the trunk so I could look at it when we got to where he needed to turn off and go north.

Finally we reached the turn-off, he pulled the car off the highway, and I proceeded to help him unload a well packed trunk. It took a few minutes and finally, laying across the bottom was a beat up old brown fender guitar case. I was so excited, it didn’t matter what was in that case…it was a Fender and that was all that mattered. He slid the case out and onto the ground. He popped the case open and there it was. This beautiful, beat up, old, scratched and chipped, beige colored, ¾-sized, one pick-up, maple neck Musicmaster:

I picked it out of the case, strummed a couple of chords, stood up, shook his hand, and said, I’ll take it!” I pulled the cash out of my wallet, helped him put everything back in the trunk, and then watched as they headed north, the sister smiling in the back seat as she strummed my acoustic.

I crossed the highway, stuck out my thumb and headed back the way I came. I didn’t need to go any farther. I was the proud owner of a Fender.

4 thoughts on “My First Fender”