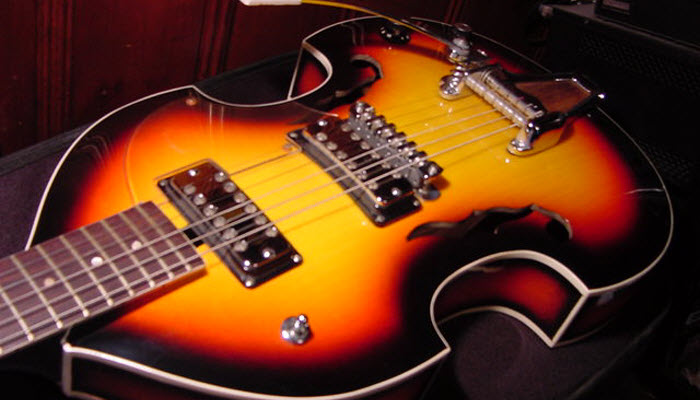 If you Google this brand, 95% of the info is about acoustic guitars. But here is a very cool example of one of their electrics. Espana was a brand used by Buegeleisen & Jacobson of New York City, who imported guitars from Italy in the 1960’s. Although not this model, It appears these same guitars were imported into UK with the VOX brand.

This model was an obvious take on the Hofner Beatle Bass from the same era, but a 6 string version. It is an extremely well made guitar (compared to the similar models that were coming from Japan at the time). The components look very similar to most VOX models of that era.

This model was available in 2 pickup configuration, 3-way switch, volume and tone with a Bigsby style tremolo. I have only seen this one model in Sunburst, and a very impressive and detailed Sunburst it is with a wonderfully contrasting white binding everywhere!