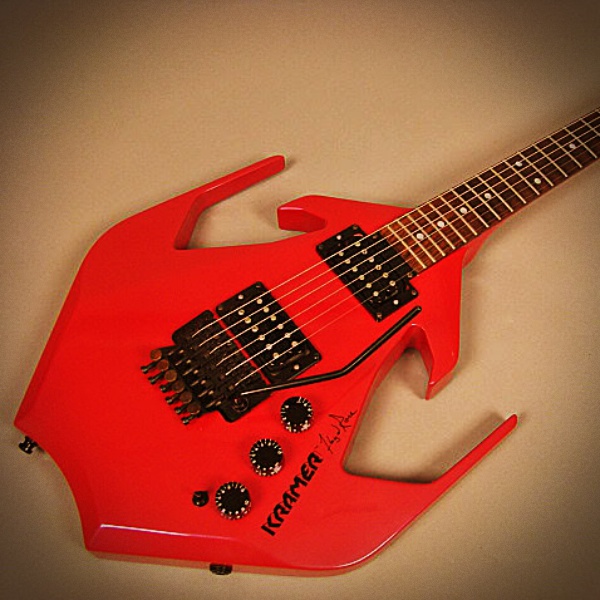 I’ve always thought it highly ironic that among the “holy grails” of guitar collecting are the truly “rare birds” that were made in the smallest of quantities, yet most of the action is in the most common mass-produced guitars of the F and G variety.  But then, I’ve always been somewhat off-kilter.  But if you were to be impressed by the truly rare birds, you’d have to be taken by the Kramer Triaxe!

The Klingon-shaped Triaxe was built back in 1986 when Kramer was flying high—as it promoted itself in advertising at the time—as the world’s largest guitar company.  This was a little bit of hyperbole, but they probably were making and selling more guitars than any other brand name guitar company.  If you were to look at OEM manufacturers—companies that produced guitars for other companies (such as Cort or Samick)—(who were making guitars for companies such as Kramer itself), the claim might have been somewhat specious.

In any case, you have to hand it Kramer for being an amazing bit of American guitar history and a major innovator.  There’s been a lot of mis-information published about Kramer guitars, some of it propagated (quite innocently) by me.  So much of the story is “anecdotal,” being derived from 1st-person interviews, which provide so much rich detail, but which can also be subject to misremembering!  This is not the venue to set any records straight.  If Gary Kramer’s own account can be relied upon, it was Kramer who bankrolled Travis Bean’s aluminum necked guitar venture “in the early 1970s,” most sources say.  Bean applied for his patent in October of 1974, so 1974 seems as good as any date.  There may have been another person involved. 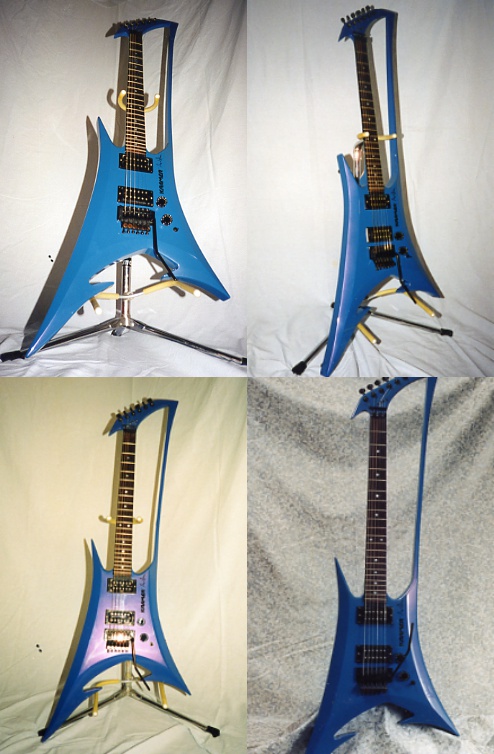 According to Kramer’s account, he was not happy the Bean had filed for the aluminum neck patent under his own name.  In addition, Kramer asserts that Bean began to get distracted from building guitars at the time, which could be true.  He also claims that the Bean design was too heavy for constant gigging and he wanted to improve the guitar, make it lighter.  There was also some resistance among guitar players to the “metallic feel” of the necks.  Kramer found himself selling Beans to a store in New York City, where he met Dennis Berardi, reportedly a partner in a music store.  He and Berardi hooked up with an ex-Gibson executive Peter LaPlaca to form BKL International in 1975 to produce a better guitar to be called Kramer.

To get around Bean’s patent, Kramer came up with the idea of a wood insert in the back of a T-shaped aluminum neck, lightening the guitar and adding a more “wooden feel” to the neck.  Anyhow, in 1976 Kramer aluminum-necked guitars debuted.  Shortly thereafter they brought in the owner of building they were leasing, Henry Vaccaro, who helped finance the operation.  These new Kramer guitars were very well received and the company began to grow.  Kramer, for reasons as yet not adequately explained (he claims extraordinary pressure to ramp up production), left the company not long after its founding and now makes Gary Kramer Guitars.

However, as the 1980s dawned, aluminum necks were becoming passe.  Kramer began switching over to wooden necks.  They were just in time for the rise of Heavy Metal, and, along with that, a taste for weird pointy guitars and for double-locking vibrato systems.  Kramer came up with the Pacer in 1983, one of the candidates (among others) for “first SuperStrat.”  Kramer managed to get an endorsement from one of the preeminent guitarists of the day, Eddie Van Halen, and signed an agreement to become the exclusive distributor of Floyd Rose locking vibratos. 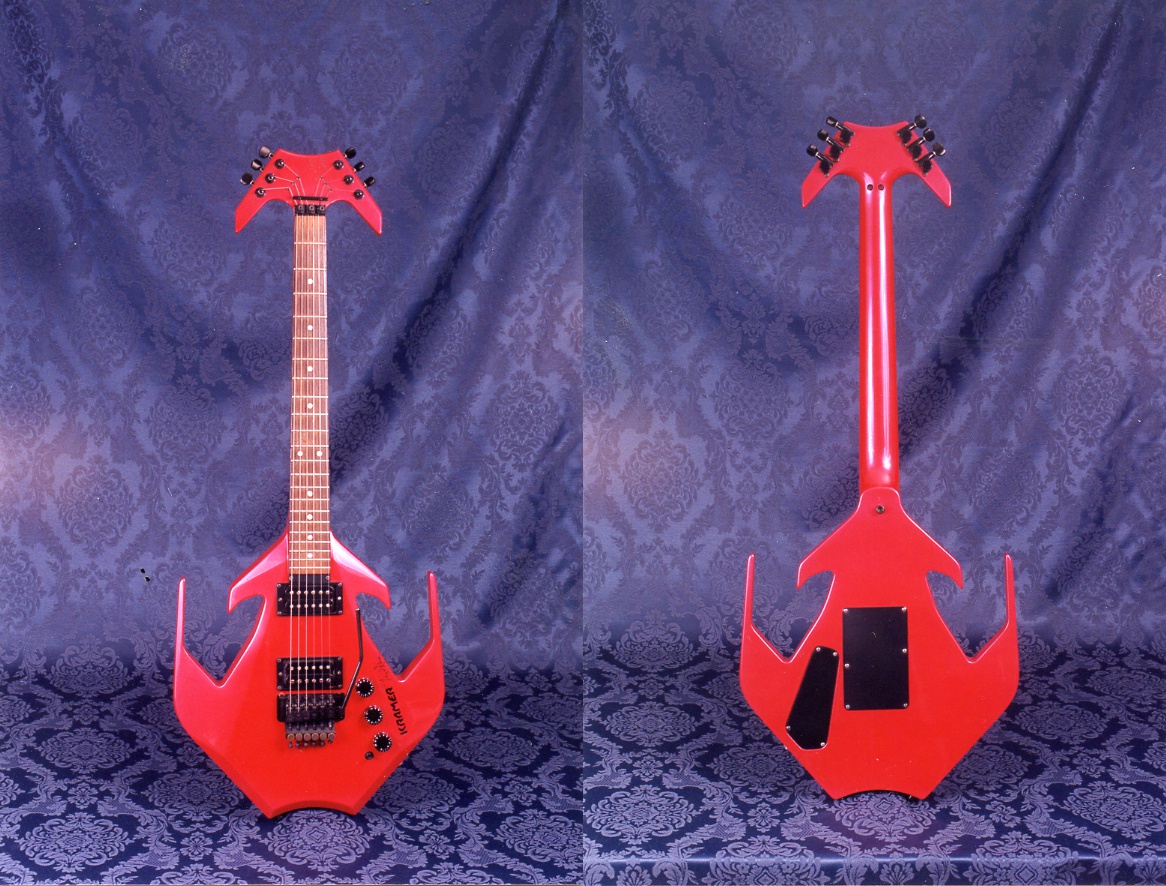 Not only did Rose let Kramer sell his whammy bars, Rose also began designing certain models for Kramer, including the Floyd Rose Signature and the two alien beings that debuted at the 1986 NAMM show, the Triaxe and the Enterprise, the not to Star Trek pretty obvious.  Reportedly, only 4 of each were made for the NAMM show.  These never went into production, for obvious reasons.  Even a good CNC program ain’t gonna make many of these guitars!

I once owned this Triaxe and have played an Enterprise.  These are not bad guitars at all, with great sound and comfortable to play, but if you tried gigging with one you’d be living in immortal dread of running into a mike stand or an amp.  Especially since they are really, really rare birds and by now worth a lot of money!

Kramer continued to thrive and grow as the ‘80s progressed.  The sky seemed to be the limit.  Then all of a sudden, they were gone.  There are a lot of rumors surrounding this demise, some probably true.  They may have gotten over-extended into concert promotion.  For sure they were about to run into a wall called “Nirvana.”  By 1991 Kramer guitars were gone.

Henry Vaccaro ended up holding the bag and the Kramer name.  He tried to revive the brand in 1998, as original (more or less) aluminum necks.  However, the finances didn’t work and to get capital he sold the brand to the House of Brands, Gibson, which proceeded to import inexpensive Asian made Kramers that were pale reflections of the glory days.  Vaccaro tried to market his own Vaccaro brand aluminum necked guitars, but, as cool as they were, the market was gone.  As were those fascinating space opera relics, the Triaxe and Enterprise!

By Michael Wright, The Different Strummer