In Dave Hunter’s great book, The Guitar Amp Handbook, he asks several respected boutique amplifier makers about any sleepers out there on the vintage market (i.e., any great sounding amps that aren’t going for the at-time obscene money that even a Silverface Fender is fetching on the market these days’ though many of them are, of course, fine amps.). Ken Fischer (of Trainwreck fame) talks about a couple of amps that he claims compare favorably to a Marshall 18 Watt Model & the Early Ampeg Reverberockets (AKA Reverbrockets to some), and the Harmony 415, made by Valco in the mid to late 1960’s. 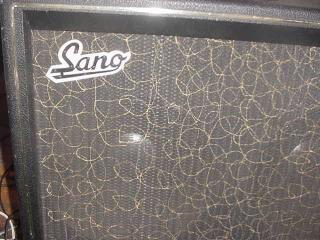 I’m going to start with the Ampeg, go Ken Fischer one up in sleepers, and save the amazing 415 for a later column (I was recently lucky enough to trade for a beat up 415, and it is truly THE sleeper 18-watt amp out on the vintage market… more in the next couple of months on that one).

To the Reverberocket. Along with having one of the coolest names ever (don’t ya love all the late 50’s and early to mid-60’s Space-Race names? Harmony’s Rockets, Ampeg Jets…the Atom symbol on everything from Gibson amps to Stratatone headstocks to breakfast cereal…remember Quisp, anyone?), it is a great amplifier. The early (1963 and some 1964) models used the nice and gritty 6V6 tube for output. This, according to legend, had them breaking up considerable quicker than the largely Jazz-centered Ampeg crowd (an image fostered by founder and, in 1964 still head honcho, Everitt Hull) wanted, and the design quickly shifted to the one most listeners are familiar with (with the clean fat-bottomed 7591 output tubes). Most had a single 12″ speaker with the early ones sporting big octal preamp tubes, and the later ones the more commonly scene (today, at any rate) 12ax7’s and the like. 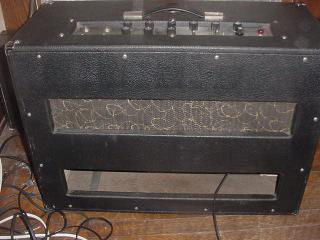 I first heard one of these at an NRBQ show in the early 80’s and was hooked. Reverberockets have a reputation for being clean amps, and that’s true enough (though they can break up nicely when pushed). They do have a great clean (and crunchy) tone. But what, perhaps, doesn’t get enough play is their reverb. It sounds to me (ears being subjective, after all) to be a much deeper and more lush verb than the Fenders of the time. Jazzier and less surf-y (though Reverberockets may be THE most underrated surf amp ever) than the traditional Fender surf sound. Also, for your early Dick Dale tremolo rolling tone, Reverbrockets have it wired.

They are awesome amps. And you’re still able to catch one for under 500 bucks on the Ebay market (sometimes in the $250.00-300.00 range, depending on physical condition).

These are not, as some websites (and Ebay listings) made by people who worked at Ampeg, but a separate and consecutively running company right down the road (both located in New Jersey at the time). They might have been reading each other’s mail (or amp designs), though, because this SANO is a LOT like a Reverberocket with an extra speaker in the cab.

The Sano is a great and affordable way to get that super Ampeg Reverberocket tone at about 60% of the price (mine cost $300 and, as I said, has 2 twelves to the Ampeg’s one). This is a twin 12″ amp (around 30 watts) with Oxford Alnico speakers. The AMAZING reverb (same sound and circuit as the Ampeg talked about earlier). Good, if not incredible tremolo, topped off by a SUPER cool swirly grill. 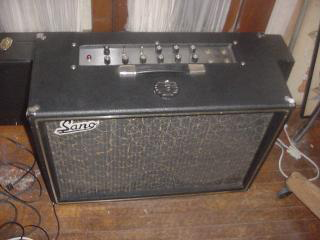 And, yes, icing on the cake, it has the 60’s spaceman swirly atom graphic on the control panel. YES!

The guts? 3 12axy’s for the preamps and reverb with a 6sc7, for the tremolo. And two 7591’s for clean, bottom-rich output…an incredibly clean full sounding amp that when cranked, can garage rock with the best of them. Not so loud, but plenty for mid sized and below gigs. It has two channels, which you can bridge with the convenient, though mis-labeled “stereo” input.

If you see them on Ebay, you should be able to snatch a minty one for under $350. A great deal for a vintage amplifier built like a tank. And now that there are new 7591’s on the market, there’s really no good reason (as there was ten years ago) to avoid Ampegs and Sanos that use these underrated output tubes, or to switch their circuitry to accommodate 6L6 tubes.

Be aware, though, there are a lot of Sano amp models. (For info on some other Sano amplifiers, and a history of the company, check out singer-songwriter Larry John McNally’s website: http://larryjohnmcnally.com/sano_amps.html) Some have a duel EL84 output and a single 12″ speaker (never heard it, but would like to), and SEVERAL that look a lot like this model are solid state. Ask questions, as always, before you buy. There are also models with a single 15″ and two 8″ speakers (for the accordion amplifier market…which has, well, dwindled since the mid 60’s).

So there you have it. Two sleepers in one (three, if you count the early 6V6 output Reverberockets). Surf is, indeed, up. New Jersey surf, that is.

12 thoughts on “Sano Amplifiers (Like the Ampeg Reverberocket Amp)”