I’m a vintage gear nut, but I’d like to think I’m not a total analog snob. While most of my amps are tube amps (and rare or oddball tube amps, at that), and most of my pedals are pretty old school (mostly home made fuzz boxes and a Homebrew Electronics Power Screamer), I have some digital stuff I really dig.

For instance, the since-discontinued Behringer Vintager AC112, is a pretty great solid state amp/tube hybrid (a single 12AX7 in the preamp stage) with some killer digital effects. You can snag them for under $150 on eBay and they’re worth every penny, if for the eleven reverbs alone. Yup, that’s right. Eleven reverbs – various models from spring reverb emulation to studio, stage, chamber and plate reverb. And all pretty snazzy sounding. Is everything about it great? Nope – or else I wouldn’t own all these Valcos and Magnatones and Silvertones. What doesn’t it do? Well, for one, the distortion blows chunks. It doesn’t have the richness and depth and dimension when it saturates – which, for me, is the true greatness of tubes specifically and analog technology in general.

Take, for instance, the difference of recording drums on digital versus tape. Push the tape a little hard and you get a warm thick lush saturation. Push the digital too hard and you get that crappy “fcccttttt” sound. Digital does cleans really well, but when you want that sound of tape saturation, there’s nothing quite like the real thing.

This is especially true with tape delay units. Run in front of a good tube amp, a nice tape echo unit can act as a great thickening preamp, along with its more obvious (and intended) applications, such as the delay itself.

What tape delay unit should you get? Got a thousand bucks – then go for the Fulltone Tube Tape Echo. It’s an amazing piece of machinery and probably the best sounding delay I’ve ever heard. However, most of us (especially us Valco/Teisco/Silvertone loving dweebs) wouldn’t pay a grand for a tape delay, when there are several really cool options available for a lot less money. And add the fact that they sound as good in their own way, and, wow, let’s go shopping.

Along with the Fulltone, at the high dollar end of the market, is a vintage Maestro Echoplex. This is the Jimmy Page classic – sounds great. Well designed and pretty awesome. But also really expensive – so, not for us. Another classic, really expensive and not for us tube tape delay? The Watkins Copycat.

If we’re going to come down the price ladder, we’re going to have to get to the solid state vintage devices. And here, I’d argue, is where a lot of the great deals (and great sounding units) and hiding out, waiting to be snagged up. Solid state tape delay units are a great deal on the vintage market – and since so much of the vintage delay tone comes from the tape itself and not the tube, the solid state is a great, reliable, good sounding option here.

Arguably the most famous of the solid state delays is the Brian Setzer favorite – the Roland Space Echo. This is a killer sounding unit – capable of combining (in the RE-301 model, at least) the slap-back delay along with Roland’s awesome chorus effect – quite a combination. These seem to be going in the $450-700 range these days on eBay. Better than the price of the tube units, but still too much for the frugal (i.e. cheap bastards) among us.

So, what’s a rockabilly boy or girl to do? Two relatively unsung (but worthy of praise) vintage tape delay models are a good option here. The Univox Echo Tech (reputedly used, for what it’s worth, on Van Halen’s Eruption – not my cup of tone tea, but one many people love big time). The Univox units go for around $200 (for one needing work) to $350, but they are more often than not broken, or in need of work (more than the other vintage units, these seem to lose a point or two for reliability). 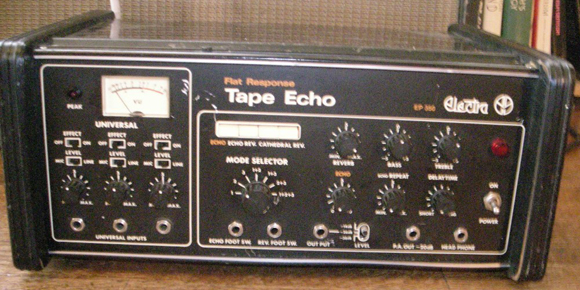 And, last but definitely not least in this roundup is this month’s crazy eBay find: The Electra EP 350 Flat Response Tape Echo. Like the Roland, this is a combination unit (the Electra carries a reverb along with the tape delay, rather than a chorus). Unlike say, an Echoplex, the Electra doesn’t use a tape cartridge – but rather has a loop of tape running free on one side, then it gets fed over six heads as it travels around a see-though top (which is just too cool).

How does it sound? Pretty awesome – as good as the Roland Space Echo. Rich, with a fat density and a very versatile (for analog – no 15 second delays here – also no cool “Sound on Sound” feature like an Echoplex, sadly) range of echo tones. The reverbs are pretty cool. There’s a standard reverb that sounds very much like one from an Ampeg (the jazzy verb as opposed to Fender’s surf vibe), plus a “cathedral” reverb that’s very cavernous indeed. 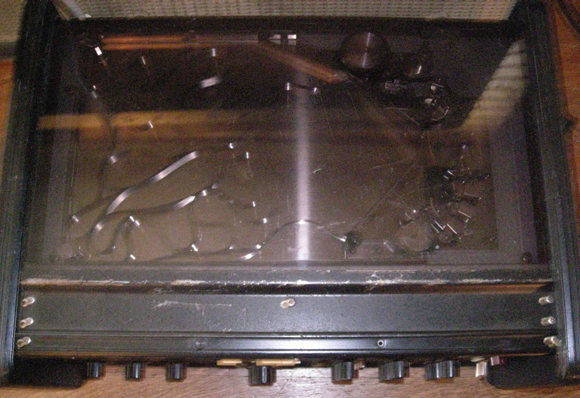 On the echo side, there’s the echo alone, or the echo combined with any (or all!) of the reverbs. You can choose several modes – with different tape heads being engaged in a number of combinations. With controls for “Echo” (depth), “Echo Repeat” and “Delay Time” you can go anywhere from a subtle doubling/thickening, to full rockabilly slapback, to full feedback freakout (and NOTHING sounds quite like a tape echo with the “Repeat” and “Delay Time” both cranked and played with it’s a zany sonic assault).

For the investigators and hunters among us, who made the Electra? Hard to say. Electra was imported and branded by the St. Louis Music company (of Ampeg fame, among others), but made in Japan at one of the many great effects manufactures there. Probably manufactured at the Shin-ei factory, but that’s an educated (or semi-educated) guess. Be on the lookout. These are true Tape Echo units that have that singular vintage analog sound that you can only get from tape, and they can be had for half the price of most other vintage units (the finicky Univox excepted).