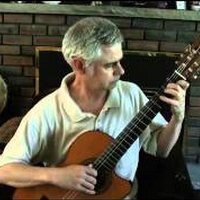 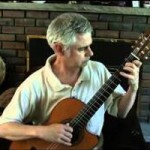 “How can there be a Dm chord in the key of C?” This is one of the most common questions I get asked as a theory teacher. In some cases the person has not considered that there must be different chords in any given key or else we would have to stay on one chord for a long, boring time. More often though the student knows that “the chords of the key of C” are C, F, and G (or G7). This last idea is partly true – those are the MAJOR chords in the key of C. However, every major key contains 3 major chords, 3 minor chords, and one diminished chord. And not only does every major key have that same number of chords of the same type – they are all in the same order.

Let’s start with the C major scale. This is simply all of the notes (i.e. the letter names from A to G) put in order, starting and ending on C. So the C major scale is: C D E F G A B C. I have placed these on the staff in example 1, with tab underneath for those who don’t read music.

To create chords in any key, we take each individual note in the key and build a chord on top of it. We call the note that we are building on top of the “root” of the chord, and its note name is the name of the chord. We then take the 3rd note above the root, and the 5th note above the root, and these form the notes in our chords. So if we take C as a root, the 3rd note up from it is E, and the 5th note up is G. Our C chord then contains C, E, and G. Likewise, if we start on D, we get F as the 3rd note up, and A as the 5th. So Dm contains D, F, and A. Example 2 shows all 7 chords in the key of C.

How do we know that C is a major chord but Dm is a minor chord? There are three ways. First, you might be able to just hear the difference between the sound of a major and minor chord. Second, you can learn the theory of intervals which will tell you the internal construction of these chords. But the third is the simplest: you can memorize the order that chords appear in a key. The sequence is the same for every major key.

Notice that all of these chords have just 3 different notes. On the guitar, we can distribute these over the strings at different locations to give us different “voicings” of the chord, but it will always have the same name. For example, whether you play a C chord in the “cowboy” shape closest to the nut or as a bar chord at the 8th fret, you are still just using the notes C, E, and G.

So to get back to the original question, there is a Dm chord in the key of C because that is the chord that we can build on the note D. The same logic applies to the Em and Am chords, as well as that B diminished chord.

One thought on “Finding the Chords in a Key”