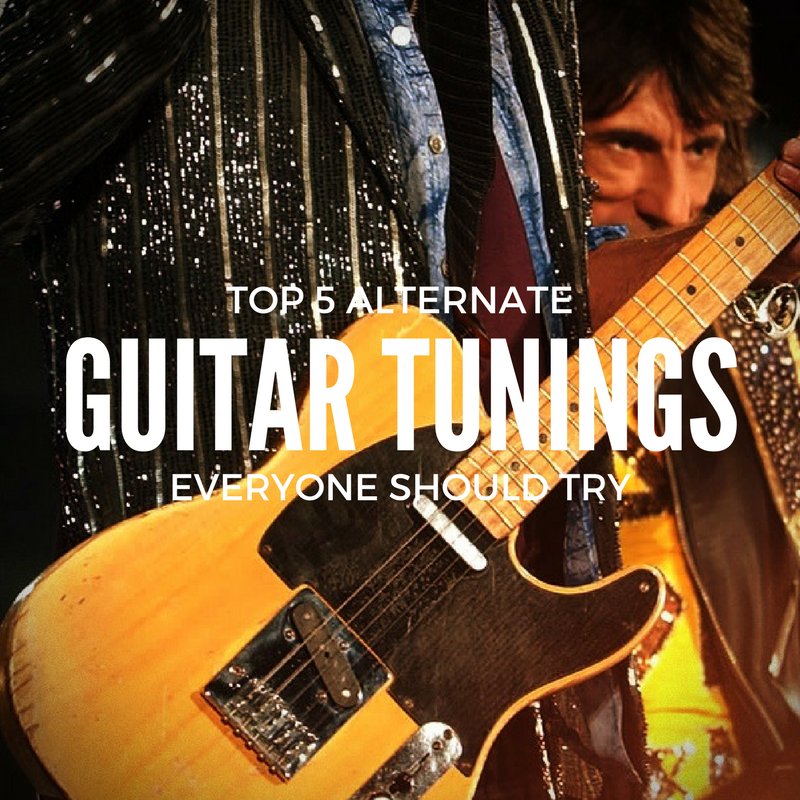 One of the most basic things everyone learns when they first start playing the guitar is the standard tuning – EADGBE. But once you start to explore new tunings, that’s when it gets interesting…

This is one of the easiest alternate tunings you can try – simply tune your bottom (thickest) E-string to D! This is a popular tuning in rock & metal. Early, famous songs featuring this tuning include The Beatles’ ‘I Want You (She’s So Heavy)’ and Led Zeppelin’s ‘Moby Dick’.

OK, now for the next tuning, things get even more interesting! Besides tuning down the bottom E-string, you just need to do the same with the top E-string? The result? A guitar tuning that’s been used on many legendary recordings, including “Cortez The Killer” and “Cinnamon Girl” by Neil Young, “The End” by The Doors, “Going To California” by Led Zeppelin and “Bryter Later” by Nick Drake. Impressive list, or what???

This is the tuning used by Keith Richards on some of his most memorable riffs: “Honky Tonk Women”, “Brown Sugar” and “Start Me Up”. Following from Double Drop D, you just need to tune yet another string down – A to G.

According to the legend, many players who tried to cover The Rolling Stones in the late 60’s, early 70’s, didn’t quite get it right, because hardly anyone knew Keith Richards used this alternate tuning, so they tried to play the songs on standard tuning.

Also, as the story goes, it was Ry Cooder who told Keef about the Open G. Interesting to note that, if you truly want to copy Richards, you need to remove the bottom D-string altogether, because he uses a Telecaster with only 5 strings for this tuning!

This tuning was used by Elmore James and is considered one of the most popular for blues, especially slide guitar. But there’s much more to it, too: the whole of Bob Dylan’s “Blood On The Tracks” album was recorded using this tuning. Other famous users include Joni Mitchell, Neil Young, Elizabeth Cotten and even Pearl Jam (rhythm parts of early hit singles “Oceans” and “Even Flow”).

This tuning was made popular by influential British folk player Davey Graham, inspired by the tuning used by Oud players in Morocco. Since then, it was used by other legendary players such as Bert Jansch and Jimmy Page.

Check out the Warren Ellis Series alternate tunings guide, for those who play tenors but also featuring some suitable for 6-string players!

One thought on “Five Alternate Guitar Tunings Every Guitarist Should Try”