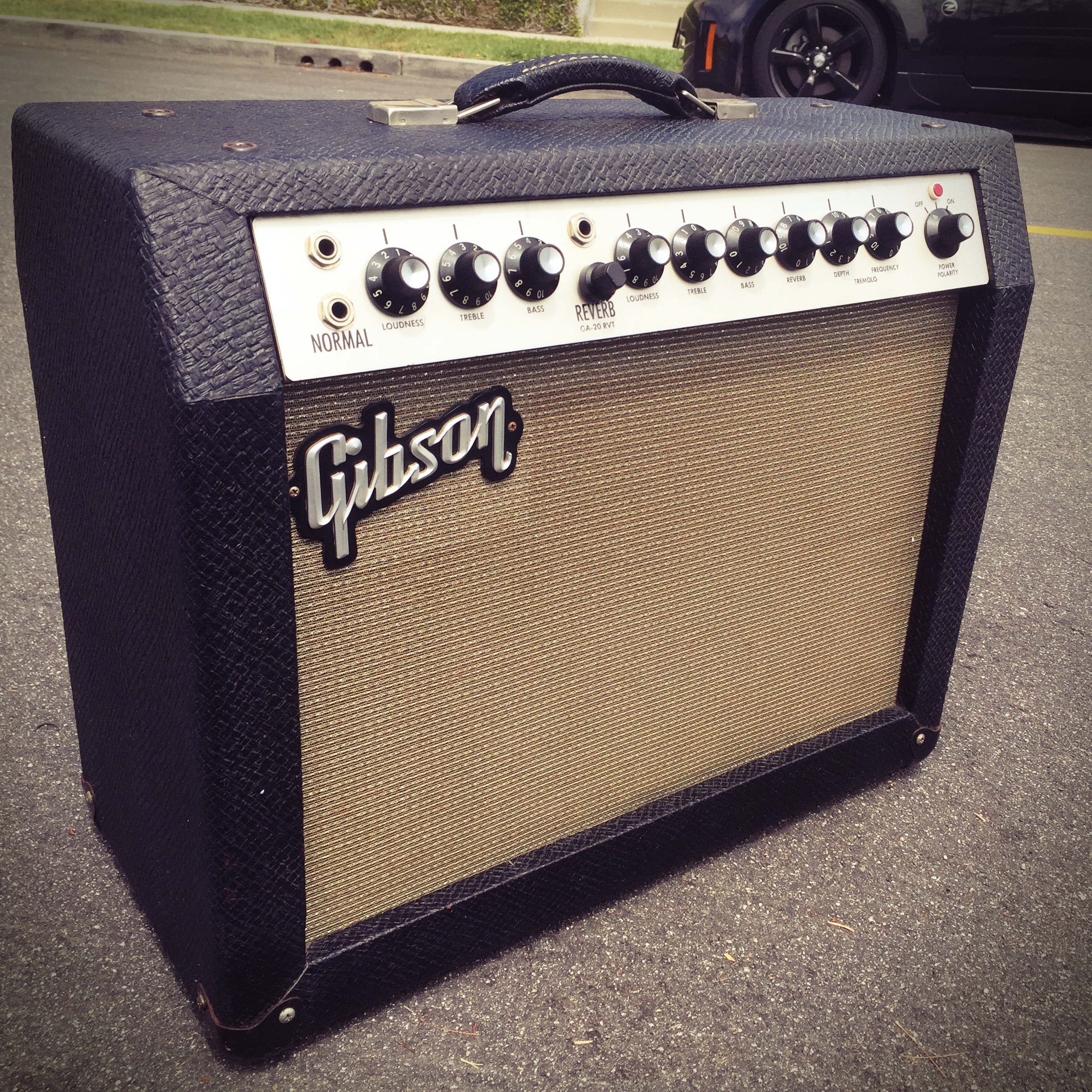 Gibson electric guitars, it’s hardly a secret, have been the dominant rival of Fenders since the early 1950’s. But that’s pretty much where the companies competitions part ways as far as the popularity of their other products go. Gibson’s acoustics are known (justifiably) as great instruments, while Fenders various attempts at acoustics have never really taken flight (though the late sixties Wildwood series are pretty underrated cool guitars, even if they’re not the equal of Gibson acoustics). And, correspondingly, Gibson’s amplifiers have never come close to having the impact of Fender’s amps.

Gibson had some great amps that ran alongside most of Fender’s classic phases. While Fender was cranking out one great tweed model after another, Gibson quietly had some great models of their own. The early post-WWII amps (the early GA series) have started to attract a pretty solid following (deservedly so) in the blues and roots music worlds. They have a warm, rich clean tone, and a really nice growl and bark when pushed hard. It’s a difficult distortion to describe, but the early models from the late 40’s and early to mid-50’s have an overdriven tube sound somewhere between the early 50’s Danelectro (often Silvertone branded) amps, and early Fender Tweeds. This series of GA’s are darker than the Fenders, yet not quite as dark as the Danos can often be.

The notes have a sweet bloom. They are great amps. This GA series included the fabulous GA-30 and GA-50 amps. Both the 30 and the 50 (and the 50T, with tremolo) sport one 12” and one 8” speaker. This pairing of the different sized speakers gave this series a sound all their own. The GA-30 had a pair of 6V6’s, and (perhaps obviously) had an earlier breakup than the GA-50, which had dual 6L6’s for their output. 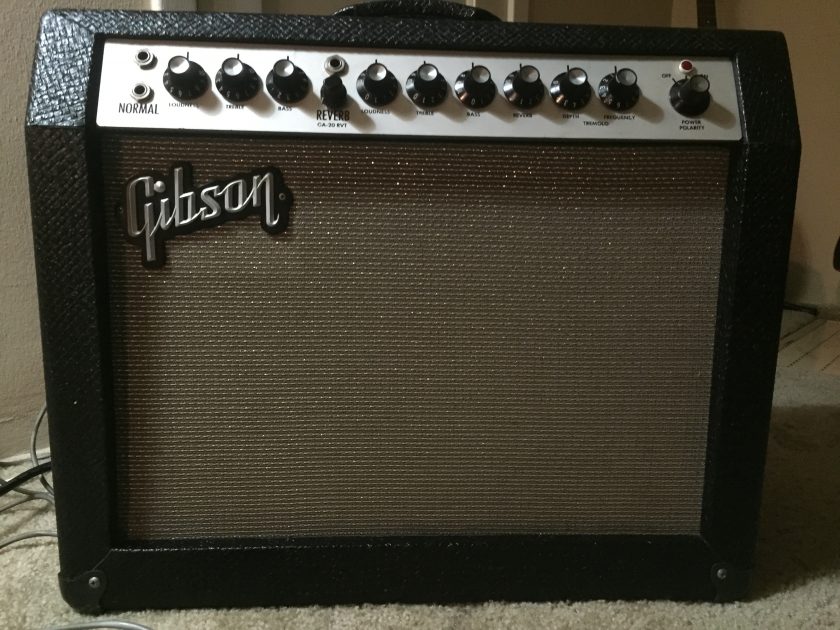 Not long after this, Gibson introduced the amp that used to be very affordable on the vintage market: The Les Paul Amp. It has, however, been discovered and now has quite a following and has become pretty expensive—though still can be had for less than most new boutique amps. This is probably the one Gibson amp I’ve heard that is closest to a similarly powered Fender model—the Tweed Deluxe. They are not identical, but it is the one Gibson that could sound similar to the Tweed Deluxe on the stage. Most of each company’s models sound very different, but these share one great quality—the breakup when pushed. The Les Paul is one of the best dual 6V6 amps ever made. Where they differ is not really a better or worse, but simply a difference. The Gibson is a bit darker, and its cleans are rounder and less crisp than the Deluxe. You can’t lose with either one. Of course, if you’re like me, you also probably can’t afford either one.

I could go through all the periods, but I want to get to a specific mid-sixties model. This period is a very underrated one in Gibson amp history. By this point, Gibson’s amps did not sound much of anything similar to the same period of Fender Blackface amps. There are some absolutely underrated and great models in this period, but they and Fender’s similarly powered amps of this period have very different tones and feels.

Which brings us to the GA-20 RTV Minuteman. This, along with the really cool Kalamazoo 12 are, loosely, Gibson’s competition for the Deluxe Reverb. Competition as far as power and features go—but not really alike. Both the Gibson and the Kalamazoo have a pair of EL84’s for about 18 watts of output, while of course the Deluxe Reverb pushes its 6V6’s up to a rated 22 watts. But the tone of the blackface Fender is so well known, it’s a classic standard of an amp that’s perfect for the studio or the stage.

Since the GA-20 RVT has its own thing going on, let’s turn to it and look at some of its characteristics. On the left, it has a “Normal” channel, which only has controls for loudness (Gibson’s name for “volume”), treble, and bass. This channel has a really rich, bright, clean (not the deepest bottom on this amp) that has a lot of chime. This channel also has a slightly different sounding breakup than the “Reverb” channel. But not that much different, and it lacks all the features of the amp, so why use the “Normal” channel? Does anyone tend to use the first channel on the Deluxe Reverb, either? Really, the best thing about the Deluxe Reverb’s first channel is that you can pull the first 12AX7 tube, which makes the reverb/tremolo channel full of more grit and drive. Sadly, there’s no first channel tube to pull on the Gibson to make the second channel have more grit and a stronger breakup.

That said, the second channel is still the channel to use. From left to right, you have loudness, treble, bass—with the addition of reverb and then the intensity and speed (called “depth” and “frequency” by Gibson) for the tremolo. Before we get to the effects, the basic tone of the amp has a lot of range. It has a rich bass (though, as I say, not as deep and resonant as a Deluxe Reverb), and a wide swing to a bright treble. And all points in between. You can coax some wonderful cleans out of this amp. Added to this, the reverb is rich…neither totally like a Fender or an Ampeg, but maybe somewhat close to an early 60’s Magnatone. It’s rich, and it has a large range from subtle to very deep. And every setting sounds good—it’s a question of what you want to do with it. But a very useful effect. 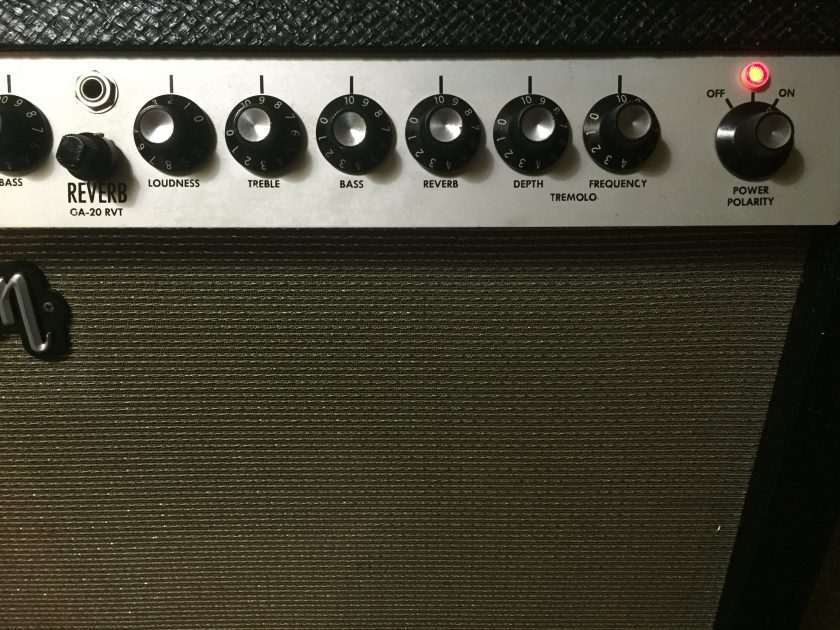 Added to this is a really impressive sounding tremolo (and the verb and trem pedal is hardwired into the amp, and tucks into its own holder inside the cab…it also has a very long cord, so it reaches as far ahead of the amp as you’d need for it to sit with a pedal board). The tremolo has a ton of both depth and frequency. When I’m using tremolo, I tend to turn it all the way up, and only vary the speed/frequency, depending on the song. But for this article, I tried from the lowest depth to just below full depth (since I’m well acquainted with every one of my amps’ dimed intensity/depth), and was really impressed by its range. Not that I will ever use said range, but it’s probably good for others to know it’s there. And the “frequency” has a really wide sweep from very slow and lush, to very fast and strong. And perhaps the best thing about the tremolo is that it doesn’t make the amp quieter when it’s engaged. So many amps have a nice tremolo that’s all but unusable in a louder section of a song because of their volume drop. But the Minuteman stays prominent and strong when engaged. Also, as a technical note under the hood, the tremolo has a variable resistor for bias adjustment.

Lastly, tone-wise, is the distortion/breakup. It’s not really like any other 18 (or so) watt EL84 amp. Not even its Kalamazoo cousin (which has a more standard and predictable—in a good way—breakup). It doesn’t have the bluesy crank of a Lectrolab (some of which were equipped with EL84’s)…the warm drive of, say, the EL84 Hilgen or a Sano (two incredibly underrated amp companies)…it lacks the throaty chime of an AC15…it sounds nothing like the great Valco-made Harmony 415 (which is actually a twin twelve amp, even though it has only the two EL84’s). It’s really all its own. What’s interesting is that it’s a bit thin when pushed on its own. But put a good overdrive pedal in front of it, and it truly sings. So, while (unlike the earlier amps like the GA-30/50, or the Les Paul amp) its natural breakup isn’t perfect on its own, it is actually an outstanding amp to push to distortion with a pedal in front of it. I’ve used several overdrive pedals in front of it, and they all sound great (if subtly different). I’ve also used a boost pedal with a single germanium transistor (based on the Dallas Rangemaster treble boost, but with settings for mid boost and full boost, as well), and the tone was incredible. So, as a platform for a good pedal, the breakup is outstanding.

A few slight downsides: the weight and the tubes. It’s not exactly heavy, but it seems like it just weighs more than a single 12” amp should. The size is great for portability, but it would be nice if it were a little lighter. About the tubes: there’s nothing wrong with them, but it has some slightly uncommon tubes. The common EL84’s and the two 12AU7’s it uses are so common many guitarists already have some of them sitting around. These aren’t even tubes you tend to need to order…you just have a bunch. And if you need new ones, they are incredibly easy to find/buy. But the Minuteman also uses three 6EU7’s. Now, these are hardly impossible to find, but they aren’t sitting around most guitarist’s homes.

Also—and this is a warning that goes for just about every mid 60’s Gibson amp—the schematics are an issue. Gibson schematics of this period are more suggestion than they are totally accurate, like, say, Fender’s were. However, most of the omissions/changes from amp to amp are really minor. But it’s something for you (or your tech) to know.

But these issues are hardly the end of the world. The GA-20 RTV is a great vintage tube amp that can still be had for between $350-450 depending on condition. I’ve seen people asking for more, but they don’t seem to move very quickly if they’re priced at $500 or higher. Is it perfect? No. But it’s pretty great amp. You just need a nice pedal, some 6EU7’s and at about $400. And, for that, it’s still something of a steal.