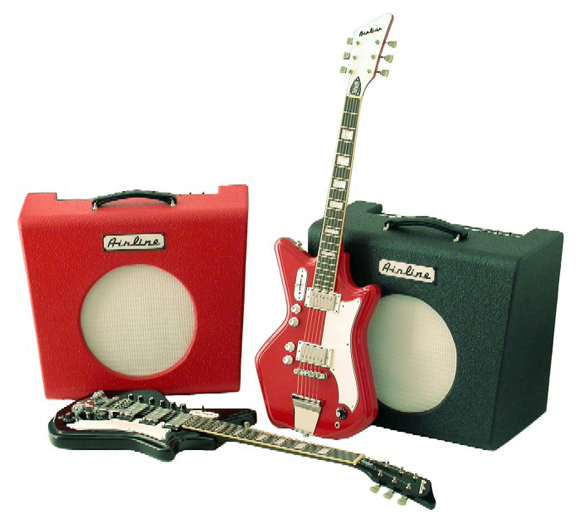 In addition to my monthly rants and raves here in Guitarticles, I also donate some experience and opinions in the design and development of many EASTWOOD guitar models. So, last month Mike Robinson of Eastwood Guitars sent me a prototype of his new Airline 18-Watt Handwired Combo Amp for review. The AMP is scheduled for release in October. Despite UPS’ efforts to the contrary, it arrived in perfect condition with a black – almost “bedliner” looking covering – a different take from the usual Tolex treatment. This material is very tough and cleans up nicely. The Airline sported an Emminence Red Coat speaker which looks to me to be a copy of a Celestion Vintage 30, which by the way is one of my favorite speakers. The controls on the Airline are simple a volume, a tone and a three position switch. The switch seems to fatten up as you go from position 1 to position 3, a great addition when going from single coil to humbucking pickups. I reported to Mike immediately that I thought the knobs – which were original 1960’s Airline knobs – are not my cup of tea, perhaps some chrome knobs?. I also thought that the pilot light, on/off, and standby switches also looked chinsey. But hey, he asked me to take this baby for a TONE test drive, not a fashion show, so now let’s get down to the sound.

I plugged the amp in and was expecting it (with its dual EL84’s) to sound like a Marshall with that classic compressed signature sound. It did not; I initially thought that the speaker was the difference but upon playing the amp more I realized that this amp was indeed a different bird. First off the Airline is a cleaner amp with more headroom then the Marshall. The Airline seems to be a bit louder than its British counterpart, hence the clean headroom. The Marshall sounds best when turned up all the way, revealing its signature sound. A sound that is fat, and compressed, with a fair amount of Marshallesque high end. You cannot get that sound from the Airline, but what you do get is a more versatile amp that sounds very good at any volume setting. It’s lively and strong in its sound. The three position switch is also a nice addition. The amp held its head up nicely when paired with my Blackface Pro Reverb in a live A/B setting.

But, when I plugged in a Strat the amp really, really shined. The guitar sounded full and nasty at amp and guitar on 10, but when I started to turn the amp down to about 6 it cleaned up w/ a funky tone that was amazing. Now the flood gates opened, I started trying all different combinations amp on 10 guitar on 5, position 1 through 3 on the tone selector, different pickups!, I was there for about two hours getting truly breathtaking sounds, all with different degrees of chunk/clarity and sustain even at moderate volumes. Before I knew it, it was sunrise and I went to bed thinking about other guitars I would have to try next day.

After a midday cup of “Joe” the Airline got fed a steady diet of my favorite Eastwood guitars, the Sidejack, Delta 6, P90 Special, and the Saturn all yielded similar results, the Airline revealed their versatility and tonal possibilities without pause.

It’s not a fancy looking boutique amp with piping and a brushed golden aluminum faceplate. It, like its guitar namesake, is a retro looking niche offering featuring unusual angles and colors. However, where most niche AMP’s turn out to be one-trick ponies, this versatile AIRLINE delivers, big time!

The Airline is a point to point custom shop handmade amp with a versatile sound, Made in Canada, quality workmanship and a well matched speaker. With most of it’s competition at a street price in the $1,800 range, the AIRLINE holds ground and offers an uncommon versatility. But, knowing Mike, we won’t have to pay that much! Right?

Verdict: I LOVE THIS AMP!!!