Hello my friends in guitar land. The most frequent question I receive from my fellow guitar players is how do I get my own sound. First, I would like to say that in my opinion a signature sound comes from your hands not from your gear. And also from a picture you have in your mind of what you want your “voice” to convey. But the idea that certain equipment will help reproduce the sound you have worked so long and hard to achieve is relevant. So I will give you an idea of what I think is a good set-up for certain types of music and specific roles being played in a musical setting. Please remember that I humbly submit these opinions in good fun and are based on over 30+ years of playing live and in the studio, as well a collecting guitars and amps during those years. I know there are plenty of guitar players out there who know a helluva lot more then I do about guitaring.

First some quickie suggestions right off the bat for you guys and gals.

Phase 2
Next on the cavalcade of hits, I will give you some examples of typical setups for certain types of music. Remember you can mix and match these suggestions for your signature sound.

Clean Country Sound:
This is a sound made popular by country pickers since the 1960’s. It’s a clean sound, very little if no distortion at all.

Gritty Country Sound:
Same guitars choice as above, just crank your amp up. 10 inch speakers are okay for this application. The Marshall TSL Series, Fender Deluxe. Vibrolux, and Super Reverb will make you smile.

Heavy Rock Sound:
Again I remind you I am an old school guy so I say…. 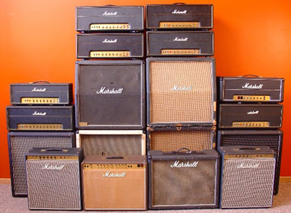 Rock and Alternative Sound:
This is a potpourri of suggestions, please take one and pass the rest back.

7 thoughts on “Getting Your Own Sound with Guitars & Amps”