Return with us now to ancient Japan, when mighty Shogun warriors roamed the countryside like Medieval knights righting wrongs by wielding sacred iron battle axes… Oh, wait; this is about guitars, isn’t it? Still, when you gaze on this 1968 Kawai Concert, you’re looking at a remarkable example of early, idiosyncratic Japanese guitar design that, in a way, has more to do with being Japanese than with the demands of export marketing. Maybe this was because by 1968 the market was pretty soft, so it didn’t matter if they turned the designers loose. Or maybe it was an expression of pride. Or something in the water. Whatever the reason, in 1968 there was this whole batch of bizarre Japanese guitars that were unique and strange, many of them employing what seemed to be Asian aesthetics, most, though not all, from Kawai and its subsidiary Teisco.

Kawai was founded in 1927 by Koichi Kawai in Hamamatsu, Japan. Mr. Kawai’s vision was to create top-quality pianos, a quest in which he certainly succeeded! Kawai added guitars to its repertoire in around 1954 and eventually became a player in the ’60s Guitar Boom. Like many Japanese electric guitars, most early Kawai guitars were slightly frumpy, although my impression is that their electronics were a little better than some contemporaries. Probably the most prominent brand names in the U.S. manufactured by Kawai were TeleStar, whose sparkle models have a small but devoted following, and Domino.

In January of 1967 Kawai purchased the Teisco guitar company, but they appear to have operated the two companies pretty much separately. Both lines featured exclusive designs and different pickups. Teisco continued the vector of evolution it had taken, ending up with the Spectrums and finally the mini-Strats, before becoming the Kay brand in the U.S. 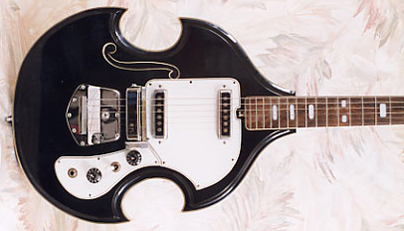 But in 1968, both Kawai and Teisco freaked out. Kawai produced models such as the axe-shaped Concert, plus a variety of unusual VS violin-bodied guitars (including one with 16 strings and its own pickup mounted parallel to the strings, whether sympathetic or strummed, who knows?), the Splender, shaped like a banjo, and another model shaped like a sitar. For Teisco, ’68 was the year that gave us the famous artist-palette-shaped May Queen, wildly flared, asymmetrical Fire Bird, and long-horn Phantom. One other company, Firstman (unrelated to Kawai), produced a model similar to the Concert called the Liverpool.

Like the Concert shown here, all of these oddballs were hollow, some like the Fire Bird in a traditional sense, others like the Concert consisting of two hollow halves glued together. The result is a cool, easy-to-carry guitar. The scrolled neck on this model was made of many multiple thin maple laminations, similar to the trademark designs of Framus. The big chunky pickups can have a pretty decent output, though it’s somewhat mitigated by the lightweight body. In addition to this black finish, there was also a sunburst, at least.

Look, these are really, really cool guitars. It’s not known whether these are particularly rare or not, but they were only made in 1968. Neither is it known if they were ever exported out of Japan. You sure don’t see many of them. Which is funny, because, let’s be honest, guitars like this are more about being seen than being played! Though the axe effect could come in handy if your fans decided to attack!…

23 thoughts on “Motorcycle Mama (The Story of Kawai Guitars)”