I called home and talked to my 8 year old son. He said that some guy named Clint called, but daddy was at work so Chad hung up the phone. I though it was no big deal at the time and said that I’d be home just after 7pm. I got another call from my bass-making- partner telling me that somebody claiming to be part of the Clint Black/Dwight Yoakum tour is inviting me to meet the band if I bring my cardboard box bass.

My partner is invisible in everything I post on the web, so if somebody actually found his phone number and put him with the box bass, then this scenario must be real. I called the number that was given to me, and had a nice chat with a voice that took my name and number and asked me to meet him before 7pm tonight at gate #1. I thanked him politely, but told him that I can’t get there till after 7pm because I’m still at work. I have responsibilities until 6:30pm. He asked if I can leave earlier, I replied no. I’m just a regular guy. He gave me his cell phone number and asked me to call him as I leave work, and again as I get near Pine Knob (DTE) He called me at 7:15pm asking me where I was because he was waiting outside and it was cold. I assured him that I was getting nearer to the venue (I was totally lost and in a party store asking directions) – I told the 7-11 counter guy that Clint Black’s band asked me to join them at Pine Knob today. He said ‘cool’ and I was on my way hoping to get to the gig without pissing off anyone. I pulled into the parking lot and phoned Brad, we met easily and I let him in my minivan as he directed me to park next to the tour buses – dammm this was fun. 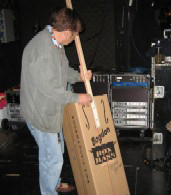 Dwight Yoakam was playing too, and I was given an all-area-back-stage pass. It was a strange feeling. It was as if everyone knew who I was but I never met anyone here. I just kept repeating the phrase “It’s All About The Bass.” EVERYONE there knew who I was, I was “the cardboard guy” and they were happy that I joined them. I was in the dressing room jamming with the band, talking about our families, food, and music theory… 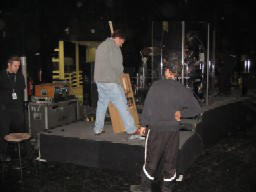 I got a GREAT upright-slapping- bass lesson from a bass legend as we laughed about cardboard and talked of wood density. The keyboardist gigged with Clint Black and all the Nashville great’s, he told me that I’m the ‘latest and greatest’ thing in his house at home and he asked me if I’d take a picture with him. I told him that I’m a mailman at heart and that I just play music for now until I make it big in the Postal bizzness… we laughed and hugged he gave me his cell phone number and we’ll exchange cheap camera pix. I talked to the road crew and asked how long they were on the road and if they had eaten yet, they hadn’t but told me that there’d be a dinner after they tear down the show… the tour has been traveling for most if the year. The monitor guy asked me if I want to plug into the sound system after Clint Black was done, and told me to be here with my box bass before the set ended. The show was fabulous! Clint Black played Hello Goodbye (Beatles), Black Curtains (Cream) and some hip classic country. I was rockin’ with my box bass backstage near the monitor board. Clint Black’s set ended and the house lights came on but the monitor guy said that he was told NOT to bring me on stage. Clint Blacks bassist grabbed my arm told me to hurry up and escorted me onto the stage and plugged my bass into the system… (for a moment I felt like a politician having to scurry after a public speech).

Without exchanging a word with anyone, the guy plugged my bass into his rig and I jammed my bass as if I were in Carnegie Hall as the road crew cheered. My cousin Alan got a few pictures and after about 5 minutes I sensed that my time was up, so I politely unplugged myself and thanked the stage crew. I went back to the dressing room to discover that everyone was gone. I gathered up my stuff and quietly left. I was comfortably normal with those musicians. They totally embraced me into their realm and we shared genuine fun. The bass tech asked if I’d sell it for $100, I said that it’s going to be on display in a Birmingham restaurant next week, so ‘no’… He asked if I’d give it to him and we laughed. I didn’t give my bass away. Call me crazy, but I didn’t have to give the bass away. I wasn’t in selling mode. I made a friendly connection with Nashville musicians who spent a few hours with me and I left with a phone number and email addresses. So I think that my sales mode should kick in after this weekend holiday. I’m a Postal Worker and Monday is Columbus Day!