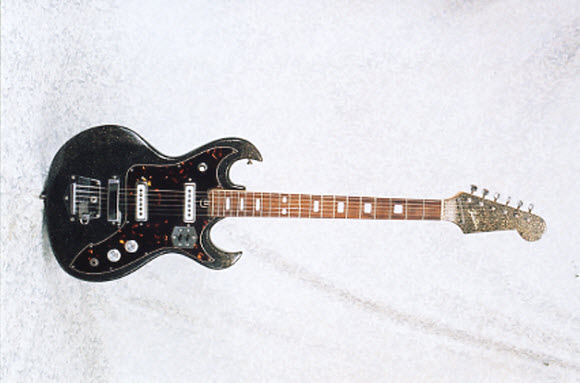 I think there’s an illusion among many vintage guitar enthusiasts that the 1960s were some sort of candy store filled with glittering guitars at every turn. Certainly the remarkable variety of brands and designs that were produced and have survived help foster this illusion of abundance. But the reality on the ground back then was quite different for most of us. Few of us ever encountered a guitar like this 1967 TeleStar until well after the fact!

When Telestar—the first communications satellite and this guitar’s namesake—was launched in 1962, I was living in a small-to-medium sized city in Michigan about a 100 miles north of Detroit. I knew about Gibson guitars, of course, and Kay and Harmony (mainly through the Sears and Wards catalogs). Even though my heroes, The Ventures, played them, I’d never heard of Fenders, much less Rickenbackers, or EKOS or Teiscos, for that matter. Inevitably, my horizons expanded to include more than Midwestern guitars, but that MicroFrets or TeleStars ever existed at all came as a revelation only years later when I became something of a guitar archaeologist. I don’t think my experience was atypical.

One corollary of the illusion about the abundance of ‘60s guitars goes beyond awareness. It’s that they were so abundant. That is, that millions and millions were produced and sold. This is just not the case. The only documentation available is from reports in The Music Trades of the time, for Japanese electric guitars. The peak year was 1966, when 618,000 were imported. By 1968 the number was down to 385,000. By 1969 it was 150,000. American or European numbers aren’t available. In any case, when you spread those numbers over the plethora of brands that created the illusion in the first place, you begin to see that the quantities of many of these guitars was relatively small.

I became aware of TeleStar guitars (sometimes it was Tele-Star) when I started buying obscure paper. Somewhere along the line I obtained a brochure with a business card for one Maurice Laboz, 1129 Broadway, New York City, stapled to it. And even then, I really only began to get a clue when I met Chip Coleman, who had a vintage guitar shop in China Grove, NC, and had a large personal collection of TeleStar guitars and basses. At the time, I was working on the Kramer history and my collaborator lived in South Carolina. He had a large personal collection of Kramers. So, I put my young son and my photo gear in the car drove southward while my Kramer buddy loaded his daughter and his Kramer guitars into his car and headed northward. We rendezvoused at Chip’s place and I got all these great photos of Kramer and TeleStar guitars.

That great experience put me onto the scent, and before long I had a couple TeleStars of my own and had documented the line as far as was possible.

TeleStar guitars were being sold by 1965. While it’s not certain, many features of these guitars suggest that most, if not all, were built by Kawai. In the past I’ve speculated that there might even have been some greater business connection between Laboz, TeleStar and Kawai, similar to that of, for example, Hoshino (Ibanez) and Elger, but probably there’s a simpler answer that Laboz just got his guitars from Kawai, or whatever the trading company representing them was. A rather remarkable number of models were offered in the catalogs over the next few years, helping to reinforce the illusion of plenty. It’s unlikely that large numbers of each of these models were actually produced

In 1967, following the corporate gobbling frenzy of the times, TeleStar became a part of the Music-Craft Electronic Corporation and moved to 651 Broadway. It was from this era that the TeleStar Professional Solid Body Sparkle Electric 5002 seen here comes. Sort of inspired by a Burns Bison, this is a Kawai product. Like many ‘60s Japanese guitars, a light weight, delicate wiring, and slightly awkward sliding controls tend to cause folks to look down on these guitars, but they really can be set up to play and sound satisfactorily. However, let’s face it, the reason you really want one of this is for the sparkle finish, little silver specks that would make this guitar twinkle in the spotlights!

TeleStar guitars, including the sparkles, lasted into 1969, around which time the warehouse burned down, and the company moved to Secaucus, NJ, and became a distributor of music accessories.

Guitars like this sparkling TeleStar are certainly eye-candy. They’re just not as common as many once thought, probably only distributed on the East Coast. Still, if not common, no illusion either!