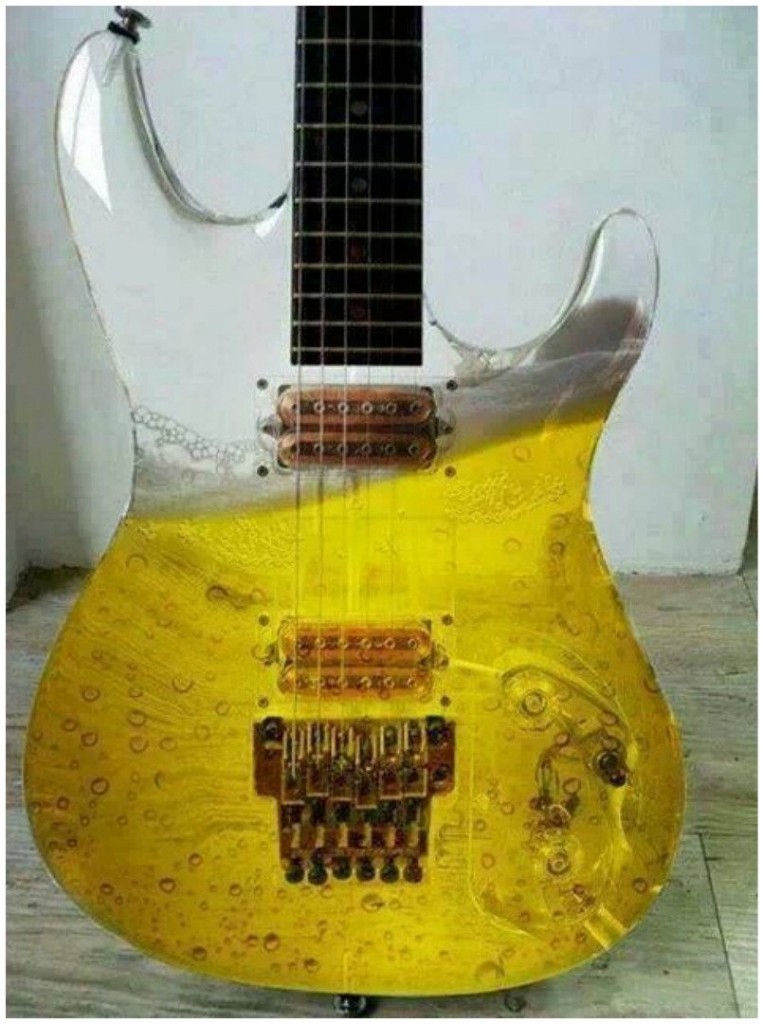 This is not an article about why you shouldn’t drink. It is, however, probably one about why I shouldn’t drink. Many musicians, maybe even most, can drink and keep their equipment. Me? No dice. I lost really cool guitars, amps, effects – you name it, I had a knack for losing it.

Even as a high-schooler with long hair, no understanding that a volume knob could be turned down and a frighteningly bad technique with a whammy bar, I seemed to be able to find rare, odd and, in general, cool equipment. I got my ability to spot gold among the trash probably from my dad, who was a gear-head and many of the best times we spent together were running through junkyards looking for a treasure someone else had tossed away (this led, however, to the abject horror of holding a flashlight in the garage while he screamed “That’s great, now how about holding it where I’m looking?” But that is another story).

So, I found guitars. While my Metallica and Black Sabbath-loving brethren were finding the newest pointy-headed Super-Strat monster, I found a 1979 Travis Bean metal neck at a yard sale. I found a 1963 Burgundy Melody Maker. A 1983 “The Strat” in Lake Placid Blue with a maple fretboard. A 1935 Martin R-17 Archtop I bought from the original owner (a, as one might guess, very old man). A 1969 Telecaster (in its original case that came with a very dry crinkly stale bag of dope) for $250.00.

This was all in high school.

By college, I’d dumbed my way into a mid-60’s Fender Twin reverb (traded for a Washburn (!?) acoustic). In 1987, I traded a diamond earring (which my grandmother had given to me to have set in a ring when I met that “special someone”) for a 1966 Harmony H72 (with factory Bigsby!) at a Philadelphia pawnshop when my band was in town for a show. It came with a brown vinyl gig bag, too – a steal.

So what went wrong?

I got drunk. A lot. A warning. For the true gear-heads/guitar lovers out there, this will be painful and graphic – as my stupidity knew no bounds for a while. Let’s get started….

At a show at some motel with a swimming pool, I ran into said pool without taking my ?69 Tele off. So, new electronics were in order. Later, I decided a fret job couldn’t be so hard, so I went with the low bidder. A tip. NEVER go with the low bidder on your guitar neck. Not a 69 Tele, anyway. Trust me.

The ’63 Melody Maker? It was a beefy monster of a little guitar and I used it in both punk and blues-based Stones/Faces type bands, until I fell in love with a woman. One who lived in Florida. I was in Boston. I was at a bar off Boylston, convinced that if I could sit her down and talk face-to-face, she’d be convinced of my greatness as a young sensitive singer-songwriter and see her way clear to letting me sleep with her, at the very least.

The ’63 Melody Maker went for a hundred bucks in gas money to a guy named “Ducky” at Daddy’s Junky Music in Boston. The woman in question had the good sense to avoid any and all advances and left me for what I’m certain were greener pastures. So, the Melody Maker was gone without any evidence of it ever existing, save some foggy memories and a few of the fireworks I bought with the gas money at South of the Border.

Next? The Fender Twin. This was the 80’s, you have to remember. And I was 20. A dumb decade and a dumb age for guitars and guitar players. And while a Fender Twin was a cool sounding amp, it was – well, old. And it wasn’t super loud. So, the plan was to sell the Twin and/or trade it for a Marshall Stack (I was in a cow punk band at the time and, looking back, the Twin would have been fine). But the bass player knew a coke dealer who could get us a deal.

The Fender Twin went for an 8-ball of cocaine to a guy named Mel who said he was doing me a favor taking “this old thing” off my hands for his fine drugs. Not enough painkillers in the world to make me numb, to this day, about that one. I had to get a Peavey 2X12 and my tone was very lousy for quite a while.

The Lake Placid Blue Strat was traded for an Ovation cutaway acoustic that melted in the trunk of a car driving through the Mohave.

The Travis Bean? A junky roommate named Ray stole it. I have no idea what he got for it. He was going bald and sang in a heavy metal band and was the first guy I ever heard say Rogaine which was supposed to help him maintain, as he called them, his “locks.”

Given away to a guy named Skeeter who ran our rehearsal space: An early 80’s Ibanez Tube Screamer.

Lost in one of the 11 apartment moves in 5 years and/or on the road: An Ibanez Flanger, an early 70’s Envelope Filter, and Echoplex tape delay and a late 60’s Big Muff and Cry Baby Wah Pedal.

Lost in a fire when earlier-mentioned rehearsal space was deluged in water damage when the falafel hut next door caught on fire (after hours – no one hurt): 1971 Stratocaster, natural, maple three-bolt neck with the bullet truss rod.

Left in an apartment in Sarasota, Florida: a lawsuit-era Hummingbird copy. I left it with a summer sub-letter and never went back to town (also lost in that mishap was a 1963 Bob Dylan live at Syracuse framed poster and all my Chess records ^%@$ argh).

And, the topper. My buddy Jeff had a wife who I was convinced didn’t like me and one night, they were visiting and we were all drunk and she’d said, “I want to learn to play guitar.” Now, Jeff had (and has) plenty of guitars. This is a man who’d found (and kept!) a Gretsch at a yard sale that the guy wanted 20 bucks for and Jeff talked him down to 12. Jeff sells guitars for profit. Not a fool like me. But anyway, I thought some grand gesture was called for so I insisted that the wife who hated me take my Harmony H-72.

I missed it all the time. It made me sick how I’d squandered so much cool guitar stuff over the years. When I finally sobered up, I had (oddly enough) my ’69 Tele, my 1935 Martin R-17 (a total Edsel of a Martin (quite possibly the only non-collectable guitar they ever made) and a cheesy little Gorilla Amp.

Then, newly sober (for quite a few years now) and with a real job (or a sort of real one – I was a musician and writer), I started getting funky old guitars again. This time actually holding on to them and/or selling them. For real prices. Not gas and cocaine money from guys named Ducky and Mel. I play and record with mostly a couple of Harmonys (a 3 pickup Rocket and a Sovereign), a Jazzmaster, A Danelectro, an Eastwood Delta 6 (thanks Mike!), and a rotating crop of oddballs that come and go (in a good way).

Jeff came to visit many years and many cities and states (for both of us) later. He was divorced and now getting remarried. I asked him if the ex still had my Harmony H72. “Are you crazy?” he said. “I wouldn’t leave that nice a guitar with her.”

Then he told me, in the truest spirit of friendship only a fellow guitar nut could understand, “I’ve been saving it for you. It’s under the bed. Just let me know when you’re ready.” This is 12 years later. He brought it from Hawaii to Seattle and mailed it to me. My guitar was back. He’d saved me from myself. I offered him one of my guitars as a thank you, but he shrugged it off.

I play that Harmony H-72 on stage now all the time. Jeff plays in a band in Seattle – this is my bid to get him the Eastwood Stormbird giveaway. I play the Eastwood I have all the time and it’s a killer guitar and I think it would be a really cool way to thank Jeff if he won the Eastwood Stormbird. It would go to a great musician, a cool guy and someone who clearly understands the value of an instrument beyond the dollar sign.