It’s curious how wildly tastes can swing in a relatively short period of time.  When, in the 1967 classic movie The Graduate, Murray Hamilton (Mr. Robinson) leans in to advise Dustin Hoffman (Benjamin Braddock) to consider a predictably successful future in “Plastics,” the very concept of “plastic” was loaded with highly negative cultural connotations.  Plastic people were disingenuous, fake, mindless pursuers of a corrupted American Dream that created the Viet Nam War.  Yet only a couple years earlier plastic was viewed as an ideal way to add beauty and attraction to a guitar such as this 1965 Avanti solid-body! 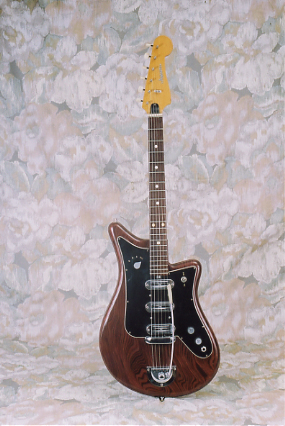 The term “plastic” comes from Greek and more or less means “moldable.”  Moldable natural materials have been used for millennia, but synthetic or man-made plastics date from mid-19th Century America.  At that time, the economy was shifting from agrarian to industrial.  A part of this shift was increasing demand for consumer goods by larger numbers of people.  Many of these products had traditionally been fashioned from natural materials.  For example, hair combs were carved out of bone.  Tortoise shell used to be, well, tortoise shell!  The problem was that, as demand rose, raw materials became scarcer.  Just one example of how cultural changes affected things: cattle ranchers stopped de-horning their steers, thus decreasing the supply of horn material.

The catalyst for modern plastics was the popularity of billiards in the 19th Century.  The growing upper middle-class found it necessary to have a billiards room (for the guys to light up cigars after dinner, you know).  Billiard balls were carved out of elephant ivory.  Enormous numbers of pachyderms were slaughtered.  Obviously, this was unsustainable.  In 1863, a contest was promoted offering $10,000 in gold to anyone who could come up with a man-made alternative.  The result was the first celluloid invented by a New York printer named John Wesley Hyatt.  Alas, early celluloid was highly flammable and prone to exploding.  Nevertheless, they eventually got the formula worked out and modern plastics were on their way.

Just when instruments began to be covered in celluloid remains to be elucidated.  However, a good candidate for the first instrument is probably the accordion, which makes sense for this guitar.  Accordion history is far less well documented than that of guitars, but in the 1850s and ‘60s accordion-making developed in and around Castelfidardo, Italy, in the northeast in the Po River delta.  The region also had a guitar-making heritage.  Castelfidardo remains the center of accordion-making to this day.  Accordions came to the U.S. in the early 20th Century and became popular by the ‘teens primarily through the Italian immigrants Pietro and Guido Deiro, who recorded extensively for Victor.  Sears sold Castelfidardo-brand accordions around this time with glued-on celluloid, including sparkle.  By the 1940s accordion technology had evolved to include covering curved surfaces in celluloid. 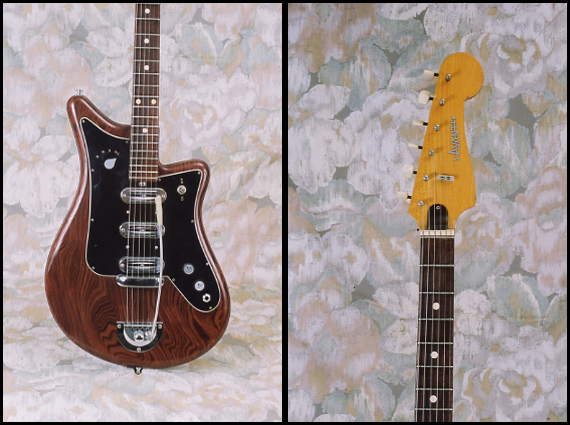 In the early 1950s there was an accordion craze among young Baby Boomers—my sister was captivated—but it fizzled out mid-decade.  This left the accordion makers—and importers—sitting with lots of capability and a greatly reduced market.  Fortunately for the accordion makers, the region of Italy where they existed was also home to a guitar-making tradition.  When Baby Boomers started turning to guitars later in the decade and into the 1960s, many accordion makers—EKO most famously (or actually Oliviero Pigini, EKO’s maker)—threw their hats into the guitar ring.  It was only natural that they should hit on covering guitar bodies in celluloid, just like their accordions!

As far as I know, EKO was the first to start making plastic covered guitars in around 1962 or ’63.  This Avanti was imported by European Crafts of Los Angeles I’m guessing around 1965.  European Crafts was importing Italian made solid-bodies at least by December of 1964, most made in Castelfidardo by the Polverini Brothers.  Presumably, this is one of those.  This is actually a pretty serviceable guitar once you’ve set it up right.  There are some amusing features, like the fake truss rod cover (the rod adjusts at the body).  What can I say?  They made accordions, didn’t they?  The pickups are controlled by a 4-way rotary switch that gives you neck, middle, bridge, all.  But really, the story here is plastic meant to look like root beer barrel candy!  Yummy!

Now, there’s nothing I love more than highly figured woods on my guitars, but root beer barrel candy plastic?  What’s not to love?  For better or worse, guitars like this Avanti were kind of yesterday’s news.  They were fine for combos in matching collarless suits with matching guitars.  But Dylan had “gone electric” and folk rock was hot.  And someone was, no doubt, working on the script of The Graduate.  Of course, there’s been a lot of water under the bridge since this Avanti appeared and today we recycle plastic.  So, show me a root beer barrel candy-coated guitar and I’m all in!  Plastics!

4 thoughts on “Roll Out the Barrel, And We’ll Have a Barrel of Fun!”