There’s a David Lodge novel where some characters, who are literature professors, play this game where they admit which books they haven’t read that everyone assumes they must have. One character names Ulysses. Another character mentions The Sun Also Rises. The main character says Hamlet and he gets fired.

And yet, for a guy who loves obscure amps (I gig often in a PAC-AMP 660…which is really just a re-branded Magnatone 260, but still, I’m usually the only guy in the club with a PAC-AMP), there are a few I SHOULD have been really familiar with, but am not.

So, which amp am I admitting to not have played until recently (although I’ve played it a LOT for the last three months)? The classic Silvertone 1484 (aka one of many different amps known over the years as a Silvertone Twin Twelve). 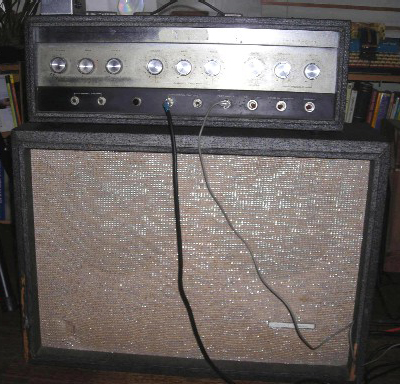 One of the true major players in oddball amps, the Silvertone 1484 guitar amp is pretty well known. It’s so well know, that it may not actually qualify as an oddball amp. But it’s still from the great Nat Daniel, the man behind the awesome kings of Masonite and lipstick pickups and wallpaper-as-Tolex’ the Danelectro company, who designed and produced some of the greatest oddball amplifiers ever done.

It’s not like I was unfamiliar with Dano amps. I’ve owned several over the years, including an awesome 4 6V6 powered Challenger, a Champ-killing 1457 Amp in Case, and a classic Tweed Deluxe-sounding 1472. I’d also restored and owned one of the rare 1485’s’ the 4 6L6 head with the cabinet with six ten inch Jensens. This was the model that had languished in its rare pawn shop obscurity until Jack White re-introduced them to the ears of garage-rock fans. Now they cost a trillion dollars, last I checked.

So, I’d had plenty of Danos. But, oddly enough, until I bought one three months ago, I’d never played through the old standby of giggable-power Danelectros: The Silvertone 1484. I got one at a killer price and figured I could tune it up and turn a profit. I don’t know why, but I just assumed it would be an overrated amp (I’d always been a bigger fan of the low wattage 1472 than the higher watt 1485, and I assumed the 1484 would share the strong-but-not-incredible tone of its big brother). 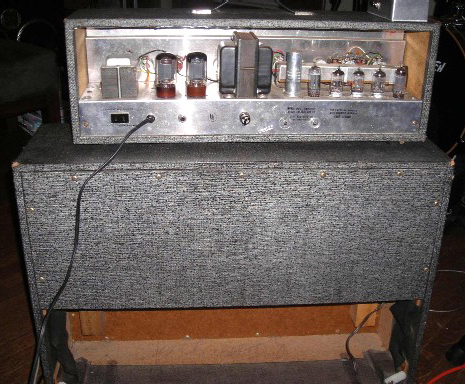 And now? Now I can’t believe what I was missing out on all those years. This amp has a great, rich, textured clean. It has the distinctive warm, dark sound of all great Danelectros, but it has the ability to get treble and chime in a manner that no other Dano model I’ve played through does.

It’s a standard two channel amplifier with Reverb and Tremolo on channel two. The knobs are interactive, so you can thicken your tone just by playing with the knobs on channel one while you’re plugged into two. Or, you can add significant thickness and grit by bridging the channels with a jumper cable.

If you were to judge this amp on its clean tone and tremolo alone, it would be a keeper. But where it really shines and separates itself from the crowd is when the volume knob is up at Ten O’clock, or higher.

This is the best overdriven amp tone I have ever heard. Without pedals, this is one of the true stunning overdriven amps EVER. In fact, there are only a few amplifiers I’ve ever heard in its class for pedal-free overdrive. Those two? My buddy Ray’s modified Supro Thunderbolt, and my friend Orlando’s 1958 Tweed Deluxe. And the thing that the 1484 and the Thunderbolt share is that they have the power of their 6L6’s with the texture and breakup of a good 6V6 amp (the Tweed Deluxe being head of that class).

And since it’s rumored that Jimmy Page may have snorted some drug off a Thunderbolt before locking away a 14 year old groupie in a closet, using the Thunderbolt to jam the door closed, that amp has become a thousand dollars. Or, wait, did he record the first Led Zep album through a Thunderbolt? Or was that a Coronado? Another model? Well, the Supro Thunderbolt was in a room where Jimmy Page was breathing, surely, at some point, and it’s worth lots of money because playing one will make you more like Jimmy Page (thankfully, this wanting-to-be-like Page thing hasn’t led thousands of old men to start sleeping with 14 year-old groupies).

But, you know, the Supro Thunderbolt, Jimmy Page or no Jimmy Page, DESERVES to be a thousand dollar amp. It’s as good sounding as any of the boutiques I’ve heard, and those two 6L6’s breathing heavy through the 15″ Jensen is a wonderful sound.

The 1958 Tweed Deluxe needs little introduction – nor even a famous person rumored to have played it, and yet it goes for three grand (drink rings and cigarette burns tossed in for free!). Neil Young plays an earlier version of the Tweed Deluxe (and listen to Ragged Glory to get a sense of what one of those sounds like opened up and roaring).

So, for the five hundred to eight hundred these 1484’s are going for, they are still a relative bargain on a vintage amp. They cost less (WAY less, in fact) than a re-issued Bassman, for instance and they blow those away for tone. You would have to go the hand wired boutique route (which is a route worth going down – support these modern amp makers!) to get this kind of tone.

The overdrive in a 1484 is rich and complex. Deep, driving and with a sweet, singing sustain. And it cleans up VERY well when you roll off the volume on the guitar. Really, there’s no amp I’ve ever played (or heard) quite like it for touch and response.

And, the head tucks into the back (how cool is THAT design)? I run mine with its head into a single 12″ cab for small gigs and into its own twin twelve (Jensens) for larger shows. Adding this amp to a really efficient speaker (like the Private Jack – thanks, Don!) is an amazing experience. A lot of these old amps (Lectrolabs, Silvertones, and Valcos) are losing a LOT of their voice due to tired old speakers. Trying a new speaker, whether a copy of its original Jensen Alnicos, or a more Celestion-voiced highly efficient ceramic (like the Eminence Private Jack), is a cheap, easily reversible mod with a vintage amp that can really take it to gigging heights.

All this and Tremolo and Reverb, too! Actually, all this and Tremolo, too. The “Reverb” that comes with this is truly awful. It’s also some weird noise that is not, let’s be clear, like any reverb you’ve ever heard. It sounds like your reverb But, this isn’t a surf amp, and you’re not Dick Dale (unless of course you are Dick Dale – hey, it’s possible – Hi, Dick! Not the amp for you). For making noise in the garage (or bar or studio), there may not be a better amp out there. Go get yours now. Yes, they were two hundred bucks 5 years ago and there a lot more now. So what? They’re still worth it. The Silvertone 1484 is a tone monster.