Remember Hondo? Well, some of us fondly remember this brand, including our own Michael Wright, who shares with us his fond memories of Hondo and… 80’s Hair Metal!

It’s not very fashionable, I know, but I like ‘80s music. I should be too old for it, but I sat out the ‘70s listening to acoustic music from the 1920s and ‘30s and playing classical guitar. I began listening to rock again in the early ‘80s, beginning with Ozzy and Randy Rhoads. Boy could he play! Anyhow, the metal, hair, and power pop bands of those days all put good, strong guitar soloing up front in the mix, and I enjoyed it. (I automatically block out vocals and lyrics, by the way, so I pay no attention to them!) Among the bands I liked was the Canadian outfit Loverboy, who had a hot lead guitarist in Paul Dean. You may be aware of the rare Kramer Paul Dean Signature guitar, but you are likely to be surprised that there was in fact an earlier “signature” model produced by Hondo, of all people! Indeed, several!

Loverboy was founded in Calgary in 1980 and released its first record in Canada in that year. They caught on big and for most of the decade cranked out hits including probably their signature tune, (Everybody’s) Working for the Weekend. It didn’t take long for guitarist Dean to begin working with guitarmakers on a guitar design he could call his own. Apparently he had some prototypes made by a Western Canadian company, though those my never have gone into production.

At some point thereafter he apparently hooked up with Jerry Freed of International Music Corporation (IMC) of Fort Worth, Texas, the owner of the Hondo brand name. Hondo gets little respect from most guitar aficionados, but it really should, both because it contributed quite a bit to guitar history and actually made some pretty good guitars (though not all, it must be admitted).

Hondo was founded by Freed and Tommy Moore in 1969 with the intention to open up guitar production in Korea, at that time a non-player in the guitar game. Japan had taken over from Europe as the primary supplier of budget-level guitars during the 1960s. However, even by the late ‘60s the success of the Japanese was being eroded by their very success and the strength of the yen. Americans, mostly as an after-effect of World War II, had little respect for Japanese products and weren’t willing to pay much for them, even if they were pretty good. When Nixon cut the dollar loose to float with other currencies on the free market, the yen went up, making Japanese products increasingly expensive, a problem in a prejudiced, price-sensitive market like the US. 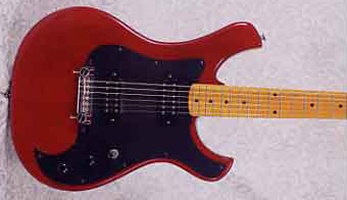 So, Jerry and Tommy went to Korea and hooked up with a small guitarmaker there that would become, I’m pretty sure, Samick. Japanese engineers from Tokai were brought in to help improve the operation and the Hondo brand was born. Named for the John Wayne western (and late ‘60s TV show). Not unlike the brand name featured here!

Hondo was initially known for its really crappy but cheap acoustics, but then picked up the low end of the copy era. Although by the mid-‘70s it was marketing some better models still made in Japan by Tokai. By the late ‘70s and into the ‘80s Hondo was making some pretty interesting “original” designs.

It was at this point in time when Hondo was hitting its stride that Paul Dean and Hondo crossed paths. As far as I know, this was Hondo’s first (and perhaps only) foray into celebrity endorsed guitars.

There actually may have been as many as three Hondo Paul Deans. There was one made from the Canadian prototypes which was apparently never promoted and probably pretty rare. In the June 1983 catalog the Paul Dean II and III were listed. The PD-2, shown here, had two DiMarzio Super II humbuckers and a BadAss-style stop tailpiece. The PD-3 had three single-coils and a traditional-style vibrato. Both had a black textured metal pickguard and came in a cherry finish with a 24-3.4” maple fingerboard over a 3-piece maple neck. Despite the respectable horse-power provided by DiMarzio, I’m pretty sure these guitars were made in Korea, because Japanese guitars of 1983 had pretty fine workmanship, which this lacks. It’s not at all bad, just not top-notch Tokai.

The Hondo Paul Dean II shown here lasted only about a year, if that. It was not in the 1984 catalog. The Paul Dean III was still listed in ’84. Both are probably quite rare and almost never seen. And close to the end of the line for Hondo.

In 1985 IMC signed an agreement with Charvel/Jackson guitars to market its Charvel line made in Japan. Let’s see. Charvel? Hondo? Which would you choose? Like a bad guy in a John Wayne western (or any by Clint), Hondo bit the dust. The brand’s fate was forever sealed when IMC bought the Jackson company in 1986. Who you gonna call? Not Hondo.

In any case, Paul Dean had bigger fish to fry. He hooked up with Dennis Berardi and Kramer guitars, which was on its way to becoming the largest guitar company in the world. In 1986 the Kramer Paul Dean debuted. But that’s another story.

Loverboy continues to perform. I still like ‘80s music, but only from the ‘80s. And only on the shuffle feature on my iPod. I’m increasingly pulled back to acoustic music from the ‘20s and ‘30s… Sorry Loverboy. But I still do like this Paul Dean II, and it’s a cool—and rare—piece of guitar history! Makes it all worth while working for the weekend…

60 thoughts on “Workin’ for the Weekend. No really! (The Story of Hondo Guitars)”