I believe this story happened in about 1966, during my last year of high school at Paradise Valley High in Phoenix, Arizona. I was a wannabe rock ‘n roll guy and like most of my friends, always had a few guitars lying around. I had this one friend, Richard Guimont, who was not a musician, but his Mom just happened to own JD’s night club in Scottsdale.

JD’s was kind of an upscale country sort of place, and countr was not really my bag in those days. But, because of knowing Richard, I could get in free, and they did occasionally have a few decent acts, such as the Everly Bros, or Johnny Rivers -so I had been there a few times. At about this point in time, however, JD’s had a “house band” known as Waylon Jennings and the Waylors. Waylon was a young ex-disc jockey, who had just come up to Phoenix from Texas. His only claim to fame up to that point was a brief stint with Buddy Holly’s band, before that fateful “day the music died.” I’d seen Waylon’s act a couple times, and thought he was actually pretty decent for a local guy. He did a lot of country- folk, or folk-rock kind of stuff then, including several Dylan songs, and a cool version of House of the Rising Sun. He was actually a very good guitarist, a fact which kind of got lost in his later stardom. 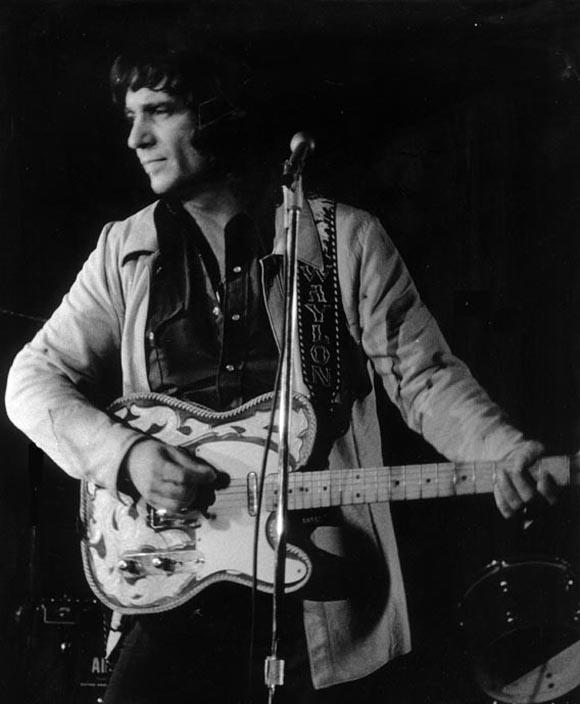 Anyway, getting back to my story, my friend Richard one day called me up and said that he was looking for a guitar for Waylon – a Telecaster (he had to spell it out, as he had never heard the word before). Knowing that I occasionally wheeled & dealed with guitars, he thought maybe I could help him get a line on one -cheap, he added, as Waylon was poor.

I said, “that’s what he already has, Richard, that thing he’s got all gaudied up with carved leather and his name all over it”. He said, “yeah, all that leather & inlays & stuff, cost him a lot. He wants to save it for important shows, and get a backup for practice & stuff”.

It just so happens that I had an old Tele, at the time. I had taken it in on a trade for a Japanese Teisco. Some guy at school wanted it, because he thought it looked liked George Harrsion’s Country Gentleman. Anyway, the Tele was just sitting in the closet, as I was into Strats & Gibson SG’s, more proper rock ‘n roll guitars. Teles were for the country dudes, in my book. Besides this one was really OLD (that was not really thought of as a good thing in those days – we wanted new stuff!) I’d say it was at least 10 years old, and it was really plain looking, what with it’s clear finish and matching maple fretboard.

So, Richard picked me up that night, and off we headed to JD’s, guitar in tow. We sat through Waylon’s first set, then we went backstage to show him the Tele. I kept apologizing for it being so old, but Waylon didn’t seem to mind. He was noodling around on it and seemed to like it. He asked, “How much?” I said I would take a hundred bucks.

He said, “how ’bout seventy five?” I said OK (I think I had paid about $25.00 for the Teisco.) He said something about coming back next week for my money. I said , “fine, but I’m not leaving the guitar.” He ignored me for a while, as if we were finished, but he didn’t seem to want to put down the old Tele. Finally Richard piped in and said, “Come on Waylon, pay the dude.” Waylon said he was broke, but the guys in the band managed to come up with the $75.00, and I left, just thankful that I had actually gotten paid, and a bit ticked off that I hadn’t held out for the full hundred.

I never saw Waylon again. Richard told me later that he had done the leather and inlay thing on my guitar too, and that it had become his favorite. I didn’t care. By then I had sold most of my stuff to accumulate the exorbitant total of $398.00, plus tax, to buy a brand new Mosrite.

Like most 60’s guitar dudes, I watched the values of those old guitars climb over the next 30 years or so. “Old” eventually became “Vintage”, and so on. I probably gave away a few hundred thousand dollars worth of guitars, when all is said and done. But that one old Tele, somehow sticks in my mind.

As you well know, Waylon didn’t stay too much longer at JD’s. Just before his recent premature death from diabetes complications, there was an ad in Vintage guitar magazine, selling off a bunch of his old equipment, as they knew he wouldn’t be touring any more.

There were a couple old 50’s Teles, decked out with the leather, etc., going for somewhere between $25,000.00 and $30,000.00. But a guy I know in Nashville, said there was a really special one, that Waylon wouldn’t sell -his favorite. I meant to try and get in touch with Waylon before he died, to ask him where he got that one special 50’s Tele, but unfortunately I waited too long. Maybe I’m better off not to know, anyway.