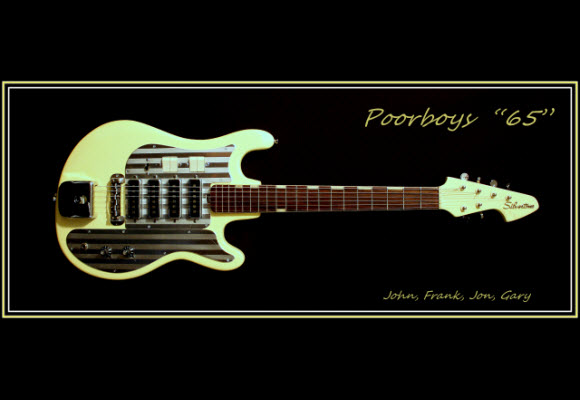 Approximately 4 yrs ago I had a brainstorm. I thought I would try to find a guitar that was similar to the one I had in Junior High (1963). That would be a four pickup Silvertone solid body guitar. When I was 12 and the Beatles came out, I had decided that I wanted to play guitar. My sister bought me a Stella to learn on, and I saved up enough to buy my own Silvertone guitar and the Twin 12 amp.

Shortly after I bought the guitar I was approached by some guys in my class, and they asked me if I would lead sing for them. Of course I jumped at it. When they heard I played guitar that was a plus.

Our band, the Poorboys, stayed together for about 4 yrs. We then split up. I lost interest in the guitar and sold it to my cousin in 1969. From this point on I never heard anything about the guitar.

Fast forward to 2009. I decided to try to find a guitar that matched to one I had. If the paint didn’t match, that would be okay, as I would refinish it to hang on the wall. I went on eBay and searched for a Silvertone 4 pickup solid body guitar. That particular day there was only one. It was a sunburst paint job. Everything worked. I contacted the guy and asked him about the guitar. He was being quite the butthead, as he acted like I was putting him out. Anyway, he had a ‘Buy It Now’ price of $550. I asked him if he was high or something, as I thought his price was totally out of place . He hung up on me.

Shortly after I bought it, I checked it out and everything worked. It was just ugly with the sunburst paint. I stripped it down and tried to make the paint work but was struggling. I put it up on the shelf.

In September of 2012 I decided to just paint it and hang it up as it was just a memory and that’s it. As I was putting it together I noticed the chrome was perfect on the whammy bar cover. When I looked underneath I found the initials (gB) The day after i bought the guitar in 1963 I took the cover off and scratched my initials on it. When I saw this I just about died. I started thinking about the rest of the guitar. I remember putting a small chip in the volume control knob when I was taking it off. I also remember that one screw that held the tuning knobs on was different as one was stripped. I checked and both were there.

This guitar is the one that I bought in 1963 and played for several years and was a very important part of my rock and roll life. This guitar is home to stay.

5 thoughts on “This Silvertone is Home to Stay”