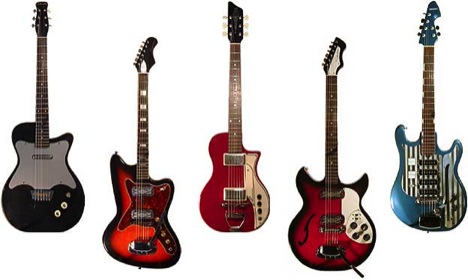 When you walk into a guitar shop, there’s a few main differences you’ll notice about the instruments hanging on the walls (other than their price). The first could likely be all the different colors, while the second may be the variety of shapes and sizes. So when looking for a guitar with a particular tone that suits you, which should you go for? The color and the way the guitar looks is all an aesthetics thing, right?

Not exactly. Sure, a guitar’s color is really just for show – but the construction and design of both the guitar’s neck and body do have an effect on your sound. Last time I talked about some of the woods that can be used in a guitar’s construction, and here I’ll talk about a couple of the ways it can be put together to both look and sound unique. 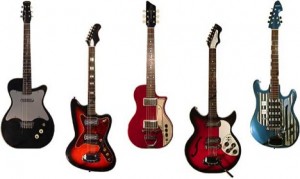 The earliest form of the electric guitar wasn’t far off from the acoustic. After all, the original intention was to simply find a method of effectively amplifying the guitar’s volume so it could compete better on stage with other popular instruments of the day. Eighty-five years later, we still see this original design in use all over the world: the semi-acoustic.

“Traditional” looking semi-acoustics retain the aesthetics of the acoustic guitar. The Gibson ES-150 was the first commercially successful of this type: a very large, thick and hollow guitar that was widely used in jazz ensembles.

When referring to the tone of a semi acoustic, the most common word you will hear is: feedback. Depending on who you are, this could be either a very good or a very bad thing! When your guitar and amp levels go up, these guitars are notorious for that high pitched growl that (if not desired or controlled) will make your ears bleed. When they were invented, there was no need to set a guitar to the level that induced such sounds. Once they were discovered as a culprit of feedback, alternative construction methods were sought out (which I’ll talk about later) while certain individuals embraced their “faults”. 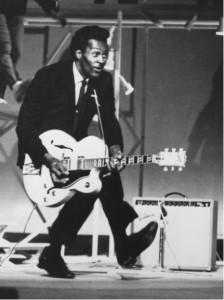 Charlie Christian, Joe Pass, T. Bone Walker, Chuck Berry, John Lennon, B.B. King, and Eric Clapton are just a few notable examples of musicians who made great use of the semi-acoustic guitar. The first two I listed were two of the earliest electric guitar players to live. Their use of the instrument is one way that it can still be used well today: jazz. The earliest guitar tones heard in jazz, rockabilly, blues etc. were done using a semi acoustic. If you are looking for the warmest, roundest yet most “chimey” tone you can find that really holds a “vintage” appeal, then make sure to invest in one of these. On the contrary, if you’re looking for a hard rock, gritty snarl that will give you ample feedback whenever you need, this is the easiest way to achieve it. Not to mention: if you already own a solid body guitar (or are in a band with another guitarist who does) you can create some pretty thick sounding tones when layering a semi acoustic with a solid body. 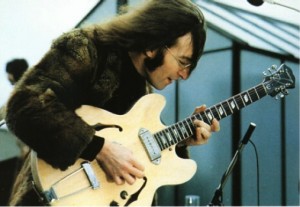 The obvious benefit of the solid body guitar is that it allows you to crank your level and gain to heights you wouldn’t be able to with a semi acoustic without getting nasty feedback. That’s not to say you can’t get any. Look at Jimi Hendrix and Steve Vai – both are masters of controlling overpowered equipment. Another benefit is that the guitar is not as delicate. If you’re one to throw your guitar around, or are prone to dropping things… a solid body is less likely to break on you. You might say it’s pretty solid. 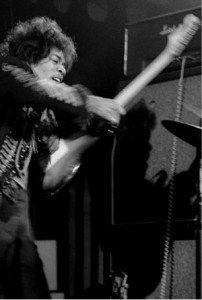 More options tend to come with solid body guitars. For example, the “Set-neck” construction was really the only design used before the birth of the solid body. Neck-through guitars and bolt-on guitars came later, and offer other subtleties in tone and functionality. The bolt-on, for example can be removed or replaced on a whim, while a neck-through guitar is commonly regarded as the best design available to achieve the most sustain. Another advantage of the solid body is that they tend to be easier to work on. Most semi acoustic guitars don’t feature a back panel, so in order to get at their electronics you have to pull everything through their pickup cavity or their F holes. Many solid bodies do feature a pack panel, and the ones that don’t tend to have their electronics mounted to their pick guard. It makes life a whole lot easier for you or your technician! 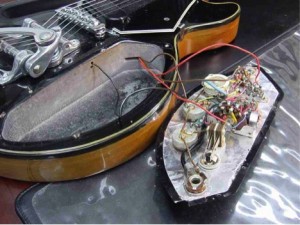 All in all, there’s a couple things to consider when deciding between these two options. Do you want to play heavy and loud without the fear of unwanted feedback? Do you want to maintain the dynamics and subtleties of your guitar while sacrificing headroom? As always, listen to your heroes and then listen to yourself. Test things out, and see what you like! If you still can’t decide, then just do what every guitarist ends up doing: buy one of everything!