I’ve been playing the electric twelve-string guitars professionally for the last 16 years in my band The Carpet Frogs. Guitar players have often complimented me on the tone of my electric 12 string and have asked me how I get that “authentic” sound! 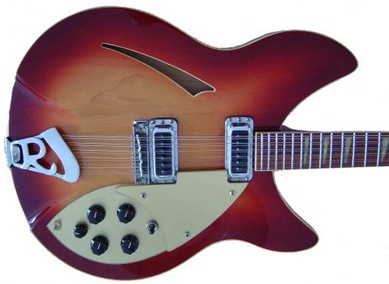 For me, it all started with the two Godfathers of the electric 12 string: George Harrison of the Beatles and Roger McGuinn of The Byrds. Obviously, the first ingredient is a great 12 string. The Granddaddy of them all is the Rickenbacker 12 string.

Ricks have been handmade in the same factory in Santa Ana, California for many years and if you can find a dealer that sells and stocks Rickenbacker, you will pay thousands of dollars and you may end up waiting many months for the model of your dreams. I waited 8 months for my 360/12 Old Style when I bought it in 1990.

If you play in a weekend band or jam with your friends, you may find that the electric 12 string, once you have done all of the mandatory Beatles, Byrds, Animals, Who, Tom Petty, R.E.M., and Smiths tunes, has a rather limited use for the rest of your repertoire. Or, maybe not. If you’re like me, you’d happily play the electric 12 all night! 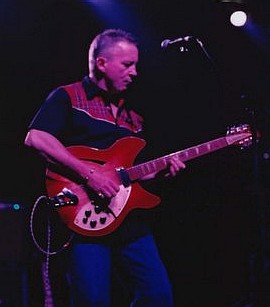 Crank up the input gain, compress the bejeezuz out of your 12 string and jangle away!

George Harrison’s great 12 string tone came from a combination of three things: his matchless technique, the venerable Vox AC 30, and the Altec limiter that was in the Abbey Road studios. The Vox, with its all-tube EL 84 platform and its GZ34 rectifier gives any guitar that creamy, brown, compression sustain and chime but it really sparkles when you play an electric12 through it.

The Altec limiter is an old tube-type studio compressor/limiter that squishes the sound at the mixing console and simply enhanced the sound of those old AC 30’s.

Roger McGuinn of The Byrds has said that his tone came from recording his Rickenbacker directly into the console and running it through not one, but two Pultec Limiters at the same time! Listen to the opening figure of “Mr.Tambourine Man” and you’ll hear those compressors squeezing away!

Now I know many of you don’t have George’s or Roger’s technique (neither do I), or access to old AC 30’s (that can cost upwards of $5,000 for collectible examples) or old pieces of studio gear like Altec or Pultec limiters, but you can achieve the same effect with a good quality stomp box compressor. My personal favourite is the Diamond Compressor made here in Canada but any good compressor will do: Keely, Ross, Analog Man, Barber, MXR DynaComp, and the old standby BOSS CS-2 or 3.

I discovered this Tone Secret the day I got my Rickenbacker 12. I had played other makes of electric 12’s before but they had never produced “that sound” that my Rick had. What was different about it? The single coil pickups that come standard on a Rick? The way Rickenbacker arranged the strings with the root string on top and the octave string underneath?

Both of these things had an influence on the way it sounded but the most important difference to me was the strings. They were not round wound like 99% of the strings that are on the market these days: they were flat wound!

Back when George and Roger were young men (1964), and before the late Ernie Ball started making round wound light gauge guitar strings in California, almost everybody played flat wound strings – that’s what was widely popular and available at the time. Round wounds were available but it wasn’t until The Shadows made them popular that there was a demand for them in Europe. The best flat wound strings in the world came from Germany (and still do) and were sold under the brand names of Pyramid and Thomastik.

Rickenbacker in California was buying Pyramids from Germany at the time (presumably because of the relationship they enjoyed with West German music retailers who were selling Rickenbacker guitars) so that was the string that was being installed on Rickenbackers from the California factory in early ’63 and ’64. So, the sound you hear on Beatles, Byrds, and The Who recordings – those are flat wound strings! The great Pete Townsend refers to them as “tape wound”. He won’t play his 12 string with anything else but!
Pyramid strings are still available to this day (you can find them on the Internet) and Rickenbacker still sells their Number 95404 Compressed Medium Round Wound.

(ground wound) set for about $20.00 a set. I buy them by the box of 12 from a store in New York. I prefer the Rick strings: just a tad brighter than Pyramids.

Round wound strings on an electric 12 string sound like doo-doo. Too crashy and too clangy. Flat wounds or ground round wounds are the way to go if you want “that sound”. If you can’t find Rickenbacker strings where you live, your local music store probably sells or can order D’Addario Chrome singles in a flat wound with which you can assemble your own 12 string set.

The string gauge shipped on every new Rickenbacker is as follows from low to high: 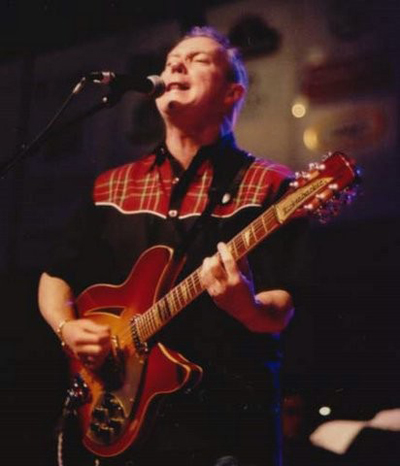 Try it! It works! A medium is too stiff and , in my opinion, “sends” too much signal to the pickup. I have found that with a light gauge pick, you can strum harder but still have a sound that doesn’t break up from string distortion (over strumming).

That kind of vibe (string distortion) works great for, say, a PRS through a Dual Rectifier but not for the sweet chimey strings on your 12 string. I keep a medium and a thin pick in my back pocket whenever I’m on stage depending on whether it’s a 12 string song or a 6 string song.

The great Colin Cripps of Hamilton, Ontario, revealed this Tone Secret to me many years ago. Colin is the guitar player/composer/producer of bands like Crash Vegas, Junkhouse, The Jim Cuddy Band, and Kathleen Edwards.

Tone Secret Number Four: Get your 12-string set up!

Find yourself a good guitar technician and get him or her to set up your 12 string.

The #1 complaint I hear from new 12 string players is that they put the guitar down because it’s too difficult to play.

The 12 string, by its design, is a different and difficult instrument to play because basically you are stuffing 12 strings into the same real estate as 6 strings. Players with small hands (like me) don’t find a problem especially with Rickenbackers, which have notoriously narrow necks.

Another innovation that Rickenbacker has developed is the 12 saddle tuneomatic bridge, which ensures near-perfect intonation. If your 12 string doesn’t have one, don’t despair. Any good guitar tech worth his or her salt will get your 12 string intonated as close as it can possibly be even if you have a 6 saddle bridge – very important if you want those big jangly chords to be as sweetly in tune as they should be.

A well-set electric 12 string should play like a brand new PRS or (insert your favourite guitar brand here). If it doesn’t, find yourself a new guitar tech!

As a professional musician – yes, I’ve got the Vintage AC-30 and the Ricky 12 – hard to see it any other way. However, there is a price to pay for perfection, and therefor II recommend to my guitar-playing friends who jam for fun, to buy an electric 12 that’s a little more affordable than a Rick. There aren’t many electric 12 strings on the market these days but a few models by Eastwood fit the bill very nicely, such as the Eastwood Nashville 12 (discontinued) or the Classic 12. 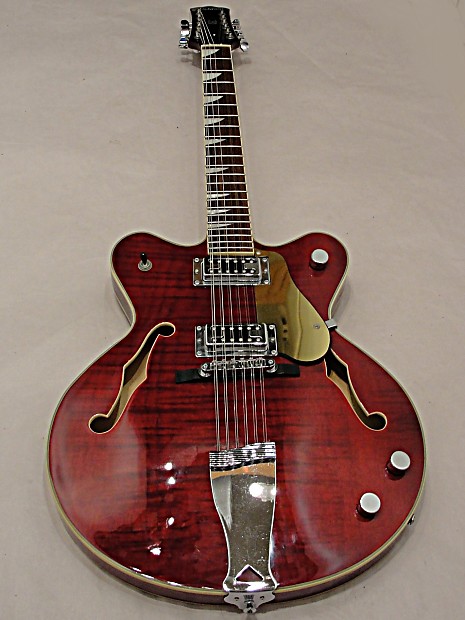 The Eastwood Classic 12, setting a new standard in price vs. affordability

Mike Robinson from Eastwood consulted with me prior to the development of the Nashville 12. We discussed a variety of options and settled on this style as is was possible to achieve the tone (mini-humbukers) and setup (flat neck, low action) that would make it a “professional” grade instrument at an affordable price. Last month I visited Eastwood Guitars and took the prototype for a test drive. Two big thumbs up…… jangle away!

Currently, though, the hugely popular Eastwood Classic 12 is the model setting the standard for affordable, high-quality 12-strings, and is the best bet if you want to discover the joys of playing a 12-string guitar:

Still want more? Visit the Eastwood Guitars website for a look at their full range of 12-string guitars:

55 thoughts on “Tone Secrets of the Electric 12-String Guitar”