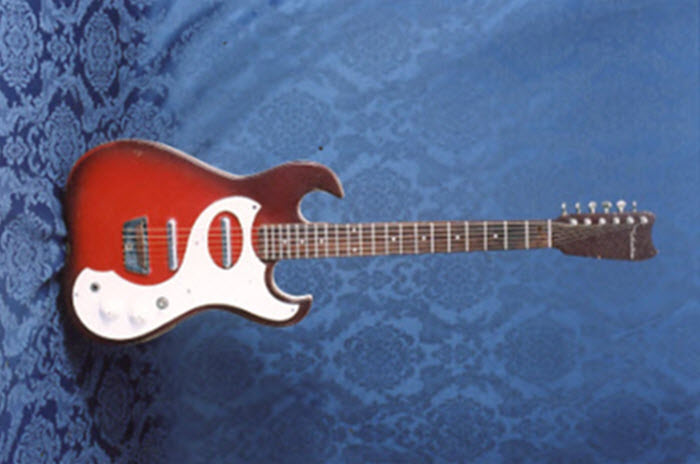 Ever since electric guitars and amplifiers were invented in the 1930s, certain folks have been interested in cutting down the amount of gear you have to schlepp to a gig. You gotta have a guitar. It’s gotta have a case to carry it in. And the amp electronics have to be housed in some sort of a cabinet. I know! Let’s combine the case and the amp electronics: Amp-in-case guitars. The primary “certain folk” was the brains behind probably the first amp-in-case guitar and the iconic version seen here, Mr. Nate (or “Nat”) Daniel, namesake of the Danelectro company. 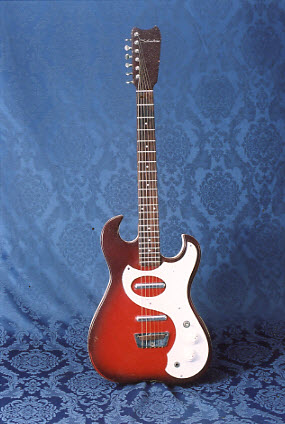 Inevitably there’s always an earlier “earliest,” but the earliest amp-in-case I know of was built by Daniel when he was working for Epiphone in around 1936. Nathan I. Daniel was a young electronics wizard who was discovered in the early 1930s by Epiphone’s head engineer Herb Sunshine building amplifiers in the basement of a New York department store (back when department stores really had departments and they did things). In 1935 the Epiphone Banjo Company changed its name to Epiphone and introduced a line of electric guitars and amplifiers called Electraphones, which was almost immediately changed to Electar. These included electric Spanish archtop guitars, Hawaiian lap steels, and little amplifiers designed and built by Nat Daniel. In 1936 Epiphone offered its Electar Model C Hawaiian guitar with an amp built into the case, designed by our friend Nat. For some reason, it didn’t go over very well, and the amp was quickly separated out into the Model C amplifier. 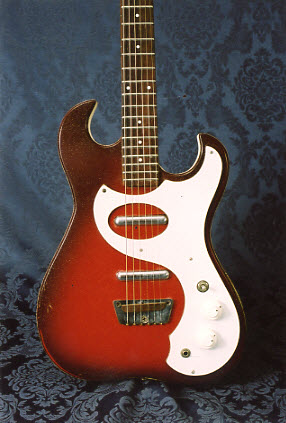 In 1938 National-Dobro revisited the idea, introducing the Supro 60 Electric Combination and the Portable Supro 70 Electric Combination. Both of these featured a little pearloid-covered Supro Electric Hawaiian Guitar tucked into an amp in case unit. I don’t think any of these earl amp-in-case designs did particularly well, but then there was something called the Great Depression going on, which had to have an effect on sales.

Obviously, Daniel thought the idea was good enough. Daniel worked for Epiphone until 1942. After the War Daniel opened his own plant, Danelectro, in Red Bank, NJ, mainly making guitars and amps for Sears and Montgomery Ward, badged Silvertone and Airline, respectively. They began selling Danelectro-branded guitars and amps in around 1954. People throw the term around all too often—and ignorantly—these days, but those ‘50s and ‘60s Danos were truly iconic. 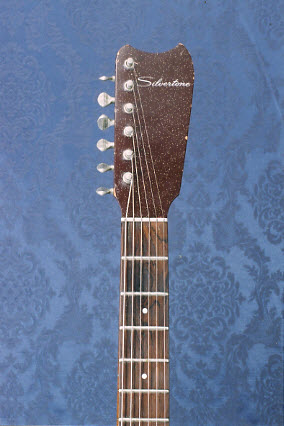 And maybe the most iconic of Danelectros were the Silvertone Amp-in-Cases made for Sears beginning in 1962. The first were the smaller black-sparkle-finished Masonite one-pickup No. 1448s with an 18-fret fingerboard and a small 3-watt, 6” speaker tube amp built into the case. These were followed in 1963 by the full-size red-sparkle-finished Masonite two-pickup guitars with a 5-watt, 8” speaker tube amp, the No. 1449. 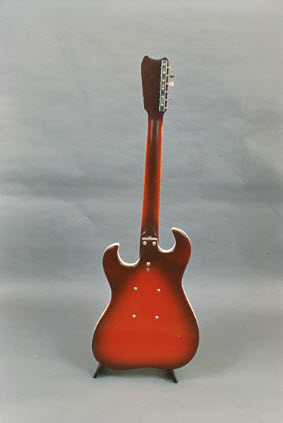 Let me get this off my chest. Something’s “iconic” when it represents something bigger than itself. “Iconic” does not mean, as modern advertising copywriters throw it around everywhere these days, “his best album,” or, more often, “very famous” or “extremely popular.” Icons are like symbols or metaphors with greater meaning attached, signaling a bigger message or concept. These amp-in-case guitars are icons because they stand for a whole generation and the changes in American culture that were transpiring in the early ‘60s. They were targeted at maturing Baby Boomers who were doing Beach Blanket Bingo with Annette from the Mickey Mouse Club (or, more likely, imagining that they were), switching from Folk to surf rock, starting bands in their suddenly suburban garages. A population on the go, on brand new Interstate superhighways. See the U.S.A. in your Chevrolet. Well, you get the point. I’ll be quiet.

As with everyone else in the ‘60s, Danelectro got bought out in 1966, here by entertainment giant MCA. Whether due to the ownership change or coincidence, the Dano line was shuffled. The two-pickup 1449 was renumbered to 1457 and a bunch of new models debuted. While the amp-in-case concept seemed to continue to 1969, it was no long the iconic versions we know and love. 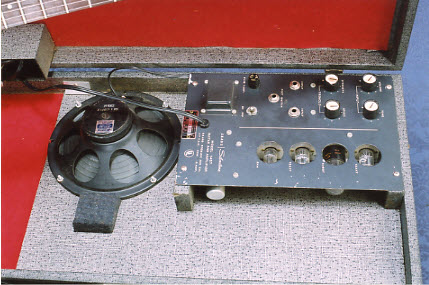 I’ve never played a 1448, but I’ve played this 1457 and the amp is surprisingly good. The 8” speaker and tube output have really sweet tone and really decent volume, more than you’d expect. I can’t say the guitar knocks my socks off, but as primitive as it is, it plays fine and it’s pretty good for a few choruses of “Walk, Don’t Run” and “Apache.” These are pure guitar fun! And, yes, they are iconic…