Just exactly why and when electric guitarists began using distortion as a musical voice is a little fuzzy, as it were. You can probably blame it largely on rock and roll, though some of those Western Swing cats were definitely pushing things. There’s no question that the electric guitar was invented in order to be louder. Early electric guitars didn’t have enough output to overdrive the preamp stages of amplifiers, but following the War pickups had gotten powerful enough to distort an amp when you cranked it up. Popular history suggests that some early rock guitarists jammed pencils into their amp speaker cones in order to get distortion during the early ‘60s. By the later ‘60s—especially with the advent of transistor circuits—musical instrument designers began to come up with electronic methods for creating distortion and other special effects suitable for the psychedelic frame of mind of the guitar’s audience! Sometimes this was an external device, sometimes it was built into the amplifier, and sometimes, like on this 1967 Hofner 459TZ, it was put right into the guitar itself!

The idea of putting “effects” on the guitar itself is as old as the volume knob, and certainly as old as the tone pot. When guitarists started putting hand vibratos on their guitars probably in the 1930s another powerful onboard effect was unleashed. As far as I know, it was probably the Germans—who else?—who added what we’d more typically call “effects” to guitars. By 1965 Framus had put the infamous “spigot” on its guitars, a spring-loaded volume control that you worked with your pinky for manual tremolo. This was a great idea but it takes a heckuva lot of coordination to get the effect! 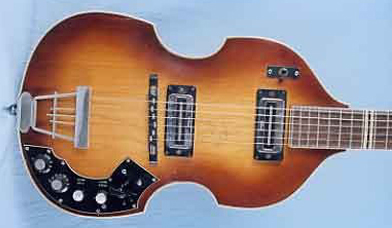 All the things we’ve talked about till now were really mechanical. Or at least I guess “passive.” As far as I know, this 1967 Hofner 459TZ may have been the first of a long line of guitars with active electronic effects built in. Of course, the first thing you notice is the violin shape, which was, thanks to Paul McCartney’s bass, the company’s main claim to fame. That alone would make it pretty cool. But then there are those groovy ‘60s Hofner celluloid fingerboard inlays. You’d like it for those. But wait, there’s more! Those nifty dual-blade humbuckers were among the best on Euro guitars at the time.

But all that pales when you consider the effects! This has basically two active circuits, perfect for your psychedelic rendition of Ina Gadda Da Vida. One, the “T,” was a treble boost. Throw the switch and (most of the time) the treble kicks in for that biting, blow your mind solo! The other, the “Z,” is a built in fuzztone distortion circuit. Want nasty? Throw that switch and (most of the time) you get that nasal idea of distortion that was big in the Summer o’ Love. “Most of the time” is basically because not everything that worked perfectly back in ’67 still does. I can swear to that.

Reliability over time issues aside, this guitar is perhaps more quaint than really nasty. We’ve all become a bit more jaded than we were back when we weren’t going to trust anyone over 30! If I want nasty these days I prefer to stomp on my Pro Co Rat. You probably have your favorite, too. And it’s probably not on this Hofner!

How long these were around or how many were made is a mystery, but not too many seem to show up. It wasn’t long after this guitar appeared that folks began experimenting with active onboard electronics that were more sophisticated, but still descended from this. Alembic, B.C. Rich. With overdrive boosters that gave you distortion. Then came the Freshers in the late ‘70s with built in wah and phasers. Then Electra MPCs with plug in modules. Perhaps the most ambitious were the Cort Effectors from the mid-‘80s with phase, delay, vibrato, wah, chorus, distortion…it could have had more but Cort figured players brains would melt with more choices. Do they all work? Well, not that bad. Not that good. The reality is you’d rather have an array of stomp boxes, or maybe if you’re real savvy a multi-effects rack.

Or, I don’t know, maybe just a friggin’ guitar with a couple pickups and a volume and tone control. Then just jam a pencil into your amp speaker! In any case, this Hofner began the other track of putting your effects where your fingers do the walking! At least as best as I can recall…