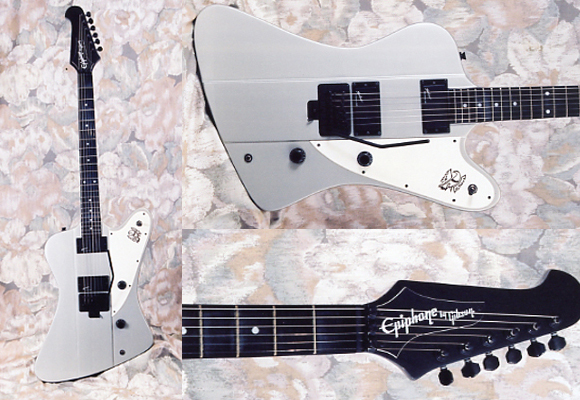 It has always amused me that one of the great tempests in the teapot of guitardom has been the legendary “lawsuit” of the 1970s. You know, when Norlin (aka Gibson) sued Elger (aka Hoshino, aka Ibanez) in 1977 over trademark infringement based upon “copying” Gibson’s headstock design. There are tons of ironies in this story, but one of the most amusing aspects is that companies such as Gibson have been one of the most egregious copyists of its own guitars over the years. Witness the Korean-made Epiphone Firebird 500 seen here:

In a general way, the guitar business has always been about copying. It was just usually a bit more subtle. Kay’s and Harmony’s first solidbody electrics in the ‘50s were loose copies of Gibson’s Les Paul. Many of the guitars made in Japan during the 1960s deliberately emulated European guitars. They were the competition, after all. When Gibson started sourcing guitars from Japan in around 1970, the guitars included some Epiphone copies of classic Epis, such as the Coronet.

The apocryphal story about ‘70s copies related to me by the folks at Aria when I was doing that history was that company president Shiro Arai was visiting the NAMM show in 1968 when Gibson re-introduced its Les Paul Custom “Black Beauty.” Mr. Arai thought, “Hmm, so that’s a copy of the original Les Paul Custom, eh?” He went back to Japan and the first bolt-neck Les Paul copies appeared shortly thereafter. That may or may not be true, but it is a good yarn. 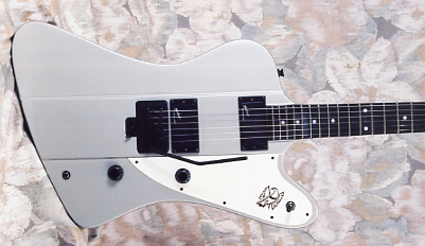 Most copy guitars from the ‘70s through the early ‘80s were associated with Japanese manufacturers. But by the mid-‘80s the dollar-yen conversion was increasingly unfavorable for Japanese guitars (meaning they cost more than Americans would pop for). Simultaneously, the Korean guitar business had been slowly evolving, with companies such as Samick (Hondo) and Cort producing better and better guitars. The Japanese were markedly superior, but Korean product was coming on strong.

In 1986 Gibson began to shift sourcing of its Epiphone guitars to Korea. Some of these early Korean Epis were nothing to write home about, but others, like this Firebird 500, weren’t too bad.

To be honest, I didn’t pay too much attention to contemporary electric guitars during the 1980s. I found this about a decade later in a “cheap guitar stall” at one of those antique malls that seem to come and go like raves. (Does anyone throw raves anymore?! To quote the great Oz, “Don’t ask me, I don’t know.”) I’d never seen this model and it obviously had neck-through construction, which I was into at the time. Also, it was silver. I never got the ‘80s taste for greybursts and silver, which I think is ugly, and which, of course, made it all the more attractive to me. I recall buying this on my lunch break and schlepping it about a mile back to the office in summer heat.

This is actually a pretty cool guitar. It’s made of mahogany. The fingerboard is synthetic ebanol, a kind of interesting alternative to disappearing ebony. Of course, you’d rather have wood, but you don’t build budget guitars with premium materials. At least the inlays are real pearl! The Steinberger KB-X vibrato was new at the time, and a pretty good unit. It took ball-end strings without clipping and you could also adjust spring tension with a lever. You could also lock this down to have a stop-tail with the flip of a switch. I’m not sure why you would want to do that, but it’s still a neat idea. The pickups are stock EMG Selects. I never really warmed to Selects. They had a good frequency response and were exceptionally clean, which made them good for pumping through effects, but they lacked essential character, in my opinion. They came in red, black, sunburst, and this silver.

The Firebird 500 and a downscale 300 were offered from late 1986 into 1988. There are no serial numbers, so this could be from anywhere in that timeframe. No production numbers are available for these models, but scuttlebutt suggests that these are relatively rare guitars. They listed for $825.25, which was pretty pricey for a Korean guitar in the 1980s.

Today, of course, it’s routine for guitar companies to offer all sorts of “copies” of their own lines sourced from any number of factories, usually Asian, sold at various price points. (And sue the pants off anyone else who comes close to copying anything they consider theirs.) There have been numerous subsequent Epiphone Firebirds, but these were the first. And always give me a chuckle when I recall the original brew-ha-ha over the “lawsuit” guitars that started it all.