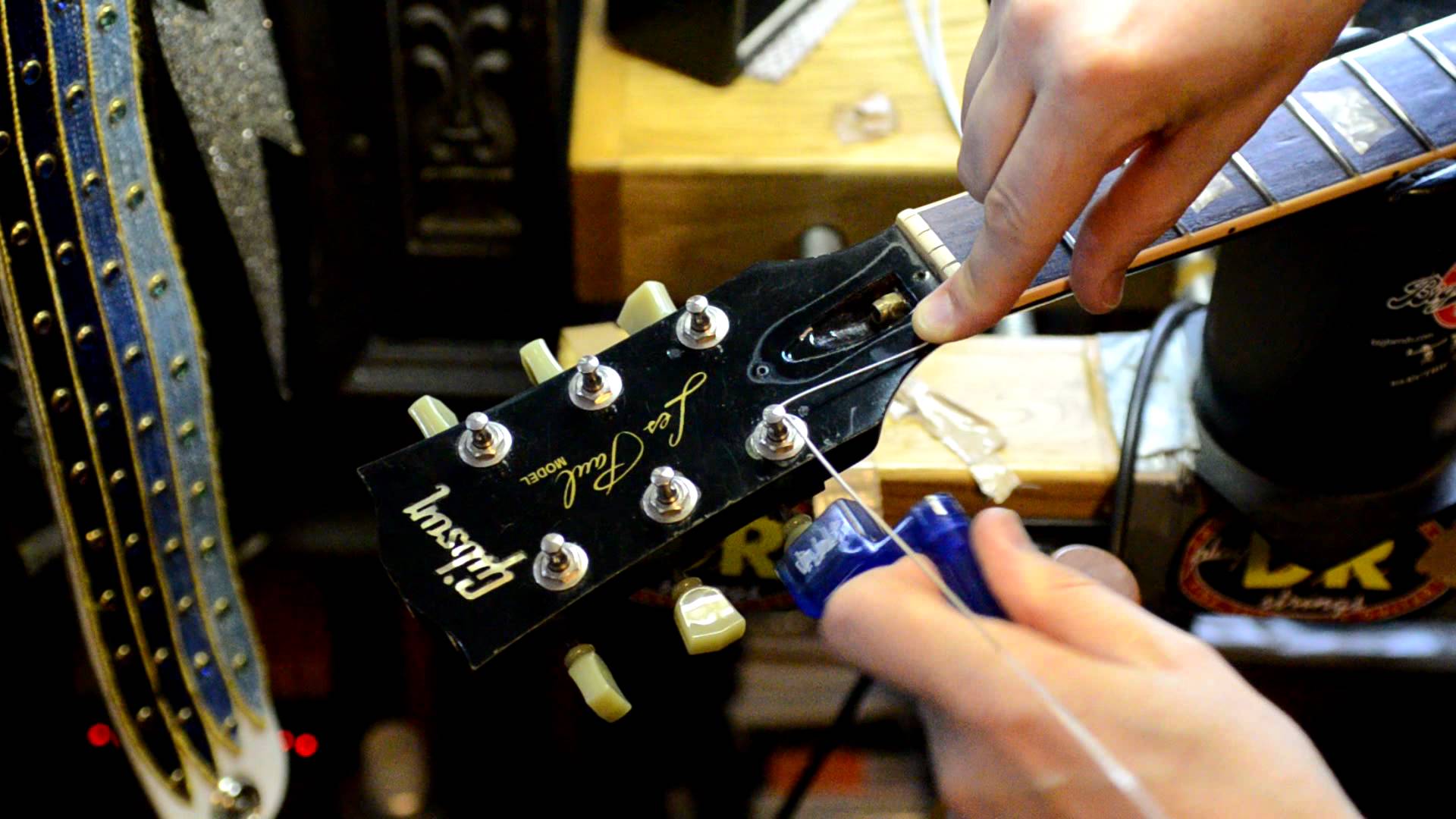 It might sounds ridiculous to some, but it’s true: some beginner guitarists often don’t know how to replace strings. This quick guest blog will help them out.

Guitar’s strings are usually durable enough to withstand months after they need to be changed, but don’t think that a popped string is the only reason why you should do that. Re-stringing your guitar should be done more often, as you won’t be able to clean the neck, and so on.

Anyhow, “why” you should restring your guitar is another topic, let’s stick with “how”. We’ll discuss several easy steps which will help you learn this crucial guitar maintenance method – you’ll be using it for as long as you play, so you might as well pay attention.

Plainly put, you could restring your guitar virtually anywhere, but that’s not recommended for beginners. Why is that? Well, every time you take a string off, you’ll also have to put it somewhere where it can (and more often than not “will”) be misplaced, not to mention the hardware.

Apart from that, re-stringing also means “re-tuning”, so, unless you have a tuner handy, you might as well want to find someplace really quiet.

Step 2 – Prepare the tools needed to re-string your guitar

Let’s put it this way – there’s a fast method which simply involves changing of your guitar’s strings, and there’s a thorough method which involves cleaning, tuning, and wire cutting. Depending on which method you want to go with, you’ll need different gear. If possible, go with the “thorough” method whenever you can, as the health of your guitar should be more important than getting lazy.

Anyhow, the list of tools you need is as following: 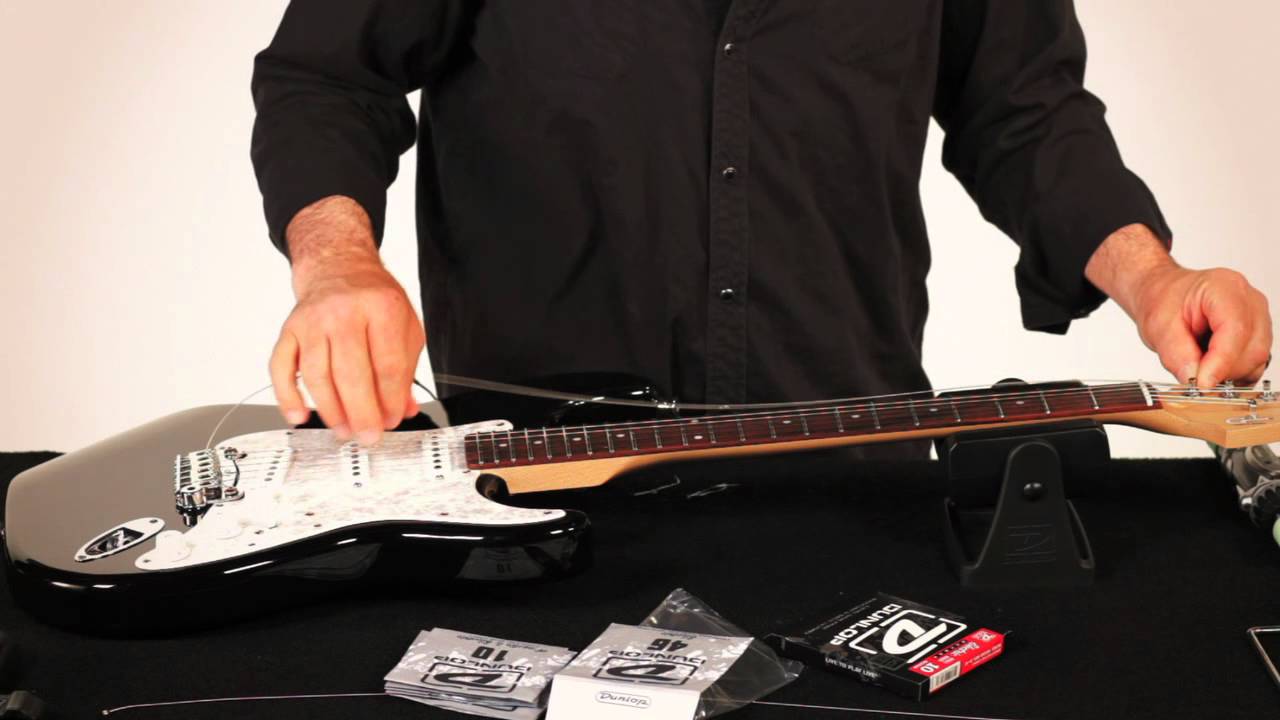 Step 3 – Lay your guitar down on a comfortable surface

Even though it’s pretty self-explanatory, it wouldn’t hurt to mention that hard surfaces are hazardous for your guitar’s neck. Obviously, you’ll want your guitar to be supported by anything soft and cozy – pillows might do the trick (note: most beginners go with the easiest solution – laying the guitar down on the knees. There’s a world of reasons why you shouldn’t do that, but the most important one involves it falling off and getting ruined).

You don’t need to think about anything in particular during this step, as all you have to do is secure the neck without limiting access to other places. For example, if you used a pillow and it’s too bulky, you might need to press it down in order to get to guitar’s head. If you want to avoid this, use smaller objects as support.

The machine heads are also called tuning keys or tuning gears. These hardware pieces are used to tighten or loosen the tension of the strings, which is simply called “tuning”. Now, before you could re-string your guitar, you have to de-tune it. By de-tuning we mean “spin the heads so that the string get loose”.

You’ll have to repeat the process for each string separately. Keep in mind, you should de-tune your guitar slowly, as quick movements might damage older machine heads.

Step 5 – Removing the pins/unlocking the mechanism from the bridge

Depending on the type of the guitar, you should either remove the pins (acoustic guitar) or unlock the mechanism (electric guitar) from the bridge.

Acoustic guitars have safety pins for each string which serve as “anchors”, keeping the strings “at bay”. On the other hand, electric guitars have a locking mechanism (typically guitars with Floyd rose), or none at all. If the latter is the case, un-screwing the machine heads would be sufficient, so this part could be skipped.

The only proper way to place the strings is to start at the bottom of the bridge. Pull the strings out from the package as you place each one, and start with the E1. Consult the list below for detailed explanation:

Now that you’ve placed the strings in place, it’s time to tune the guitar. Choose the tuning as you see fit (standard tuning is E, A, D, G, B, E, just like the name of the strings). Most musicians can tune their guitars by ear, but if you’re having difficulties, you can use a guitar tuner.

In case you don’t have it, try figuring out the E1 string tuning by ear, and proceed with other strings, keeping in mind that the fifth fret of your E1 string should sound exactly like the open A string (and so on, with the exception of the G string, which should be fretted at the 4th fret instead of 5th).

Re-stringing your guitar is a standard maintenance procedure. It might appear hard at the beginning, but you’ll get better and faster with time. Most beginners tend to get confused with a step or two, especially the tuning part, but don’t get dissuaded even if you don’t nail it in your first try. In the worst-case scenario, you’ll just pop a string or two before you get it right.

I’m Anh Vu who has worked sound technology industry for 10 years now. Today, I am an affiliate blogger who likes to educate my audience more about sound technology. Visit to headphonesunder100center.com to find all information about music that you need.

One thought on “How to re-string a guitar”